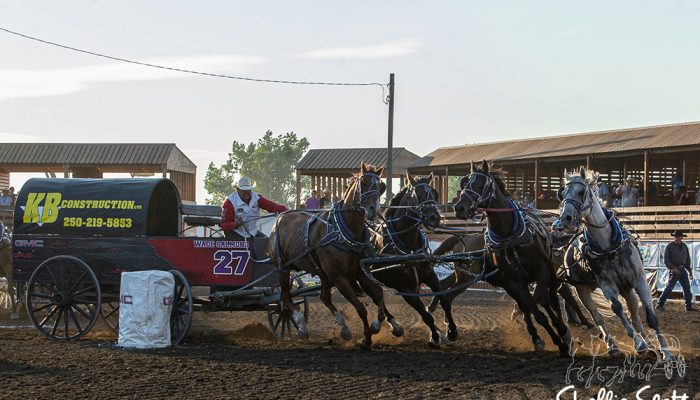 Times were a little faster as night 2 of the Battle of the North at Mile “0” of the Alaska Highway in Dawson Creek, British Columbia was run on Thursday evening. When the dust finally settled, it was Wade Salmond’s turn to cash the top cheque on the night after a penalty free run of 1:14.38.

From barrel number 1 in the 5th heat Salmond’s KB Construction Ltd. rig was the top wagon of the night by a 19 one-hundredths of a second margin over than Kris Molle who placed second for the evening. Day 1 winner Kurt Bensmiller placed third, Vern Nolin placed fourth, with Cody Ridsdale’s wagon which is being driven by Chanse Vigen, completing the top five fastest wagons on the night.

After two runs, Kurt Bensmiller leads the overall aggregate standings with a combined time of 2:30.62. That’s 40 one-hundredths of a second better than the Ridsdale outfit, with defending champion Obrey Motowylo and 4-time Battle of the North Champion Kirk Sutherland making out the top four. Rae Croteau Jr. is just 34 one-hundredths of a second out of that ever so important fourth spot overall.

Night 3 of the Battle of the North from Dawson Creek, British Columbia can be heard live on Friday, August 12, 2022 on WPCA Radio at 9:30pm Eastern, 8:30pm Central, and 7:30pm Mountain time on Real Country 910, as well as seen live on the Cowboy Channel + App streaming platform.