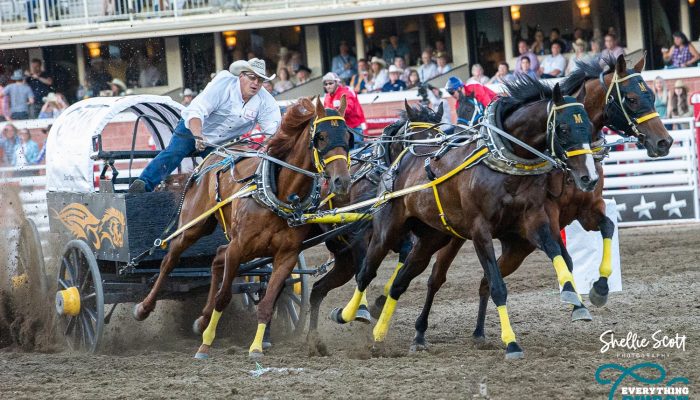 Calgary, Alberta (July 10th, 2022) – It was another perfect night for chuckwagon racing as Night 3 of the Cowboys Rangeland Derby ran under partly cloudy skies and and a warm 23⁰C on Sunday night in Calgary Once again it was a very tremendous night of racing, and reigning World Champion Chuckwagon Driver Obrey Motowylo, driving Grant Production Testing Services outfit, posted the fast time on the evening with a run of 1:13.17.

From barrel number 1 in the 9th heat, Motowylo was 19 one-hundredths of a faster than Chance Bensmiller who grabbed second place on the night. Chanse Vigen, even with a 1 second penalty placed third, followed by Layne MacGillivray and Mark Sutherland filling out the top five on the night.

Chance Bensmiller now leads the overall aggregate standings with a three-day total of 3:41.32. That puts him 2 tenths of a second ahead of two-time finalist Chanse Vigen with Layne MacGillivray now holding down third spot overall. Kurt Bensmiller and Obrey Motowylo are in 4th and 5th place respectively, both less than 4 tenths of a second out of the top 3. The top 3 in the aggregate after Saturday, July 16, 2022 will go into the championship final heat. The winner of the championship final heat will be declared the 2022 Calgary Stampede Cowboys Rangeland Derby Champion.

Live coverage of day 4 of the 2022 Cowboys Rangeland Derby can be seen on Monday Night, July 10, 2022, on Sportsnet One starting at 8:30pm local time. Check your local listings.