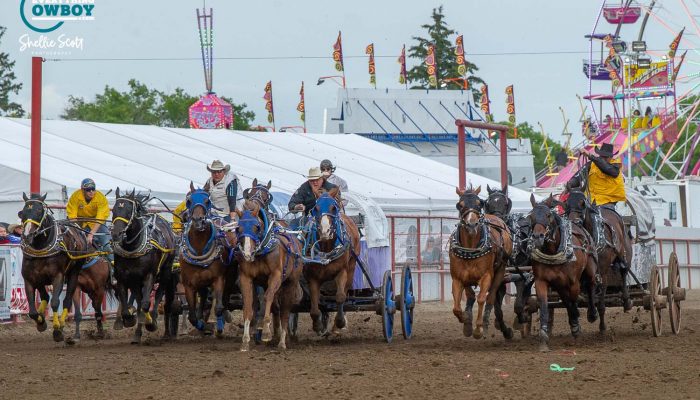 Ponoka, Alberta (July 4, 2022) – At the beginning of the 2022 WPCA racing season, ten chuckwagon drivers who took out permits to race on the 2022 WPCA Pro Tour. One of the goals was to be in the top two in the permit standings to have a chance to compete at the Ponoka Stampede as Wild Cards. In an unusual twist, the two Wild Card wagons would find themselves in a highly anticipated $50,000.00 Tommy Dorchester Championship final heat at the Ponoka Stampede – Obrey Motowylo, Rae Croteau Jr, Ross Knight and Jordie Fike – all survived the semi-final round and would run for one of chuckwagon racing’s most illustrious championships on the WPCA Pro Tour – the Ponoka Stampede. Croteau Jr. and Knight were the two Wild Cards to qualify for the 2022 Ponoka Stampede Championship.

As far as day results go, Chad Fike grabbed the day money after posting the fast time of the day with a 1:20.02 from barrel number 1 in the second heat. Kelly Morin’s outfit which was driven by Doug Irvine placed second, with 2022 Ponoka Stampede Champion Ross Knight in third, Jordie Fike in fourth, and Layne MacGillivray filling out the top five on the night.

The WPCA Pro Tour will now take a break for the Calgary Stampede Rangeland Derby from July 8-17, 2022.