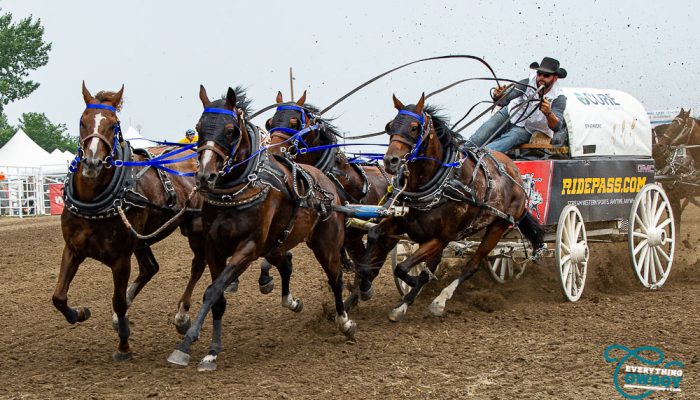 It was an outstanding weekend as the Strathmore Stampede wrapped up on a warm Monday afternoon on a good dry racetrack. Capacity crowds and great chuckwagon racing was the order for the entire event, and for the first time in his career, it was Chance Bensmiller, driving the Core Ag Inputs Outfit, and along with outriders Brendan Nolin and Nolan Cameran, who hung on by a whisker and captured the 2021 Strathmore Stampede Championship. It’s the first career win for rookie outrider Nolan Cameron.

On the afternoon, from barrel number 4 in the 4th heat, Kris Molle took top money after posting the fast time of show with a 1:14.85 and won the day money by a huge 1.08 seconds over Kurt Bensmiller. Dayton Sutherland, Kurt Bensmiller’s second hook, and Kirk Sutherland made out the top five fastest wagons on the day.

The WPCA Pro Tour will now have a quick turn around and will be racing at the Bonnyville Chuckwagon Championship in Bonnyville, Alberta. Racing starts on Thursday August 5, 2021 and runs through to Sunday, August 8, 2021. Catch all the live action on WPCA Radio at 9:00pm Eastern, 8:00pm Central, and 7:00pm Mountain time on Rural Radio on SiriusXM Channel 147 Satellite Radio.