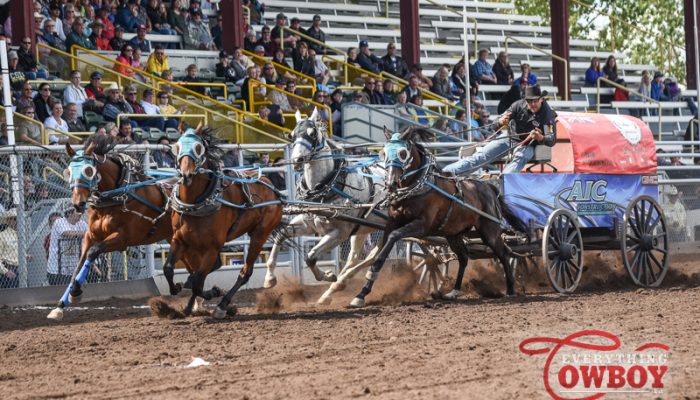 GRANDE PRAIRIE (May 25,2022) – The start of the 2022 chuckwagon season kicked off on Wednesday night with the 43rd running of the Grande Prairie Stompede. 44 drivers are here to contend for this year’s Grande Prairie championship, while Obrey Motowylo came into the 2022 season as the reigning World Champion Chuckwagon Driver.

Weather conditions were cool under mostly cloudy skies with a touch of rain, but racetrack conditions were very good, and some spectacular chuckwagon races were seen by the Grande Prairie fans on opening night of the professional chuckwagon season. When the night wrapped up it was local hero kirk Sutherland who opened up the 2022 season with the fast time of the night with a fast run of 1:17.14.

Coming off barrel number 1 in heat number 10, Sutherland, driving the Hansen Ford outfit placed first overall for the day by exactly one-tenth of a second over two-time Grande Prairie Champion Jason Glass who placed 2nd overall for the night. Kale Lajeunesse made his WPCA debut a successful one placing third, Layne MacGillivray placed fourth, while Kurt Bensmiller fifth place on the night.

The top wagon in the aggregate after Saturday’s run will receive the Ralph Vigen Memorial Award and the use of a new GMC Truck for one year. The top 4 drivers in the aggregate after Saturday night will go into the championship final heat on Sunday where the winner will receive a $25,000.00 winner’s cheque and the Grande Prairie Stompede Championship.

Day two of the Grande Prairie Stompede can be heard live Thursday night, May 26, 2022 on Real Country 910AM starting at 8:30pm Eastern, 7:30pm Central, 6:30pm Mountain Time. As well, fans can watch the races live on the Cowboy Channel + App streaming platform.