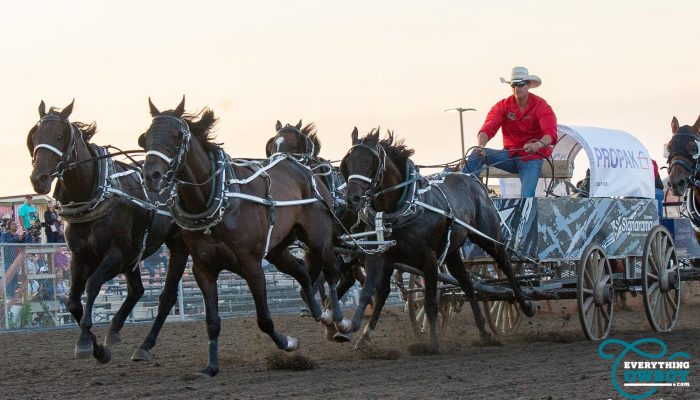 Night one of the Century Downs World Chuckwagon Finals is in the books and opening night was a tremendous success. The races were run in front of a near capacity crowd, it was a warm 23°C under a few clouds with excellent racetrack conditions. With over $300,000.00 in cash and prized on the line over the 5-day event.

For the 36 drivers who are racing for the Aggregate Championship at the Century Downs World Chuckwagon Finals, it was Chad Fike who was the fast man with a penalty free run of 1:25.66. In heat number 8 from barrel number 2, Fike, driving the Propak Systems Ltd. outfit, was tops on the day with a 1:25.36. That put him just 3 one-hundredths of a second faster than World Points leader Layne MacGillivray. Kelly Morin, Rae Croteau Jr. and Kurt Bensmiller rounded out the top five on opening night. The driver posting the best 4-day aggregate time after Saturday’s run will be declared the champion of the Century Downs race meet.