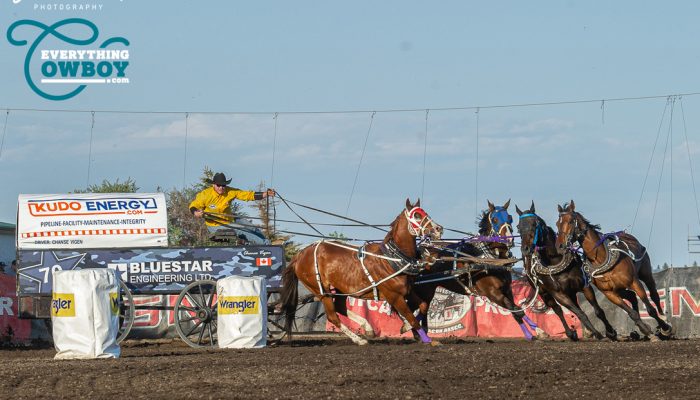 One year after he thought he had won the championship until a late penalty took it away from him, Chanse Vigen, driving KUDO Energy Services outfit, and along with outriders Rory Armstrong and Ryan “Mad Dog” McNeill, got some redemption and won the Victor Ringuette Memorial Championship Final heat and the 2022 Bonnyville Chuckwagon Championship.

On the day, permit driver Brad McMann, driving the Optimum Equipment Solutions outfit, posted the fast run of the afternoon and won his first day money on the WPCA Pro Tour with a 1:18.00. That put him 21 one-hundreds of a second faster than 2022 Bonnyville Champion Chanse Vigen who placed second for the day. Kris Molle was third, Cruise Bensmiller fourth, with Cody Ridsdale filling out the top fives times on the final day of competition.

The WPCA Pro Tour will now take a one week break before embarking on Medicine Hat, Alberta for the Medicine Hat Exhibition & Stampede starting Thursday June 16, 2022 and running through to Sunday, June 19, 2022.