Brooks, AB: This is the first “What’s that Bull” column of 2013! I am excited to be writing it today. These ones in the past year have been my favourite to write. I like to include my opinion on the match-ups where otherwise I’m going at things with an unbiased approach to tell the news in my best effort.

Starting things off, you might like to know a bit more about the event before I get further into it. The following comes from the Facebook Page of the event. To see more, check it out for yourself here. 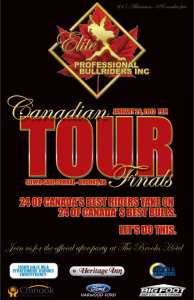 The EPB is excited to announce the inaugural EPB Canadian Tour Finals! The Tour Finals will be held on January 26th at 7:00 pm MST at the Silver Sage Community Corral in Brooks, AB. The event will feature 24 of the EPB’s best bullriders matched against some of the country’s top bulls vying for the $7,500 added Tour Finals Championship and buckle. Canada’s top contractors will also be challenging one another to become the Tour Finals Bull Team Champion, as contractors will be entering bulls (3 long round, 1 short round) competing for cash and a buckle as well. All members are encouraged to download the Canadian Member ballot and vote for the finals personnel they would like to see work the event.

The current Canadian Event members standings can be viewed by visiting http://eliteprobullriders.com/Standings/Canadian_standings_12.html

Daryl Thiessen and Ty Prescott are the bull fighters selected to work the finals as well for those interested.

Now, here are my thoughts on a few of the key match-ups of the night.

Josh Birks vs. OB703 Road Rage – Josh Birks has all but won this title already. As far as I know he’s already got the year end buckle wrapped up. If I know Josh how I think I know him, he wants to win the event too in order to make it a clean sweep.

Tyler Thomson got thrown off Road Rage in Cochrane this past summer.

Dan Hansen vs. PB82 Smoke Show – This bull came from Derek Adams originally. The first trip I remember seeing him have was with Adam Jamison in Bassano back in June. I thought the bull looked a bit small then. I bet by now he’s ready to take Dan to a high score and the pay window too.

Youngster and hipster with his orange belt, Tristan Carlier took on Smoke Show back in September at Callaway Park.

Zane Lambert vs. PB822 Norman – Zane Lambert won the Spokane, WA PBR Touring Pro event at the start of this month. Since then he hasn’t had any luck on the Built Ford Tough Series. I think Zane is happy with this draw in Prescott’s Norman. My guess is 85 points on the black brockle faced spinner.

Cody Moore would have been at least that in Lloydminster at the 3D Bullriding Tour Champioships last October.

Ashton Arychuk vs. RG142 Bet on Deuces – I’m not sure when Ashton rode last or how he did but I’m putting my money on him. Ashton got engaged to his girlfriend at the time and now fiancé Deidre a couple weeks ago. I think we will see some vintage high flying spur action from our albino looking buddy on the respectively high flying and paint looking Bet on Deuces on Saturday Night. 84.5 points would be a vintage score here too.

Brendon Clark rode Bet on Deuces for an 82.5 in Coronation at the Royal Rumbull in August. Notice the word ‘vintage’ is also mentioned by Dave Poulsen in this video…

Adam Jamison vs. RGS17 Uncle Moe – Uncle Moe is probably one of the nicest bulls around. A straight black muley that turns back quick. I think this is the pick of the pen for a long go bull from Nate Gardner. I’m betting Adam rides this bull and gets himself back in good shape for the Short Go.

Garrett Green matched moves with Uncle Moe for an 83 in Delburne at the Hillbilly Stomp in September.

Tyler Pankewitz vs. PV801 South Side Fade -This bull looks rank and pretty tough to ride. I think Pank has got this one covered for the Long Go win.

Zane Lambert came down early from South Side Fade of Prescott and Vold in Elnora in August.

Cody Coverchuk vs. PV803 Uncle Buck – Cody made his way into the finals this week as a replacement for Curtis Neufeld. In my opinion, Cody should have won the CCA Finals this past November in Regina. I think he rides great. I think Uncle Buck is a great bull too. I like this match-up and think Cody will be in the mid 80’s here.

Speaking of Pank, he won Elnora this year on Uncle Buck.

Those are my thoughts, check out the draw for yourself here and share your thoughts as a comment below!

See you in Brooks, AB on Saturday Night!