*With Lynda Thurston on behalf of Everything Cowboy Inc.

GREAT FALLS, Montana — Twenty year old Zeke Thurston claimed his first Championship one month after turning in his amateur status and taking out his membership with the Professional Rodeo Cowboys Assoc.

Thurston barely missed winning the National Intercollegiate Saddle Bronc title in 2014 by a mere ½ point at the June showdown in Casper, WY. After two years of rodeoing for Sheridan Wyoming College, Zeke hit the Pro Rodeo trail as a permit holder.

Designating Montana as his official circuit proved to be a good move as Thurston won $10,596.77 at regular season rodeos in the state. The Albertan athlete came into the Montana Pro Rodeo Finals second behind another cowboy with Canadian roots, Tyrell Smith (son of former NFR bronc rider John Smith).

Thurston placed in PRCA events consistently throughout the season and also managed to qualify for the upcoming events by earning a position among the top 50 Saddle Bronc riders in the world standings.

Opening night of the Montana finals saw Zeke ride his way to a first place win with an 83 aboard Brookman’s Drinkin’ Again. Although Zeke earned $1,649 for first, Tyrell Smith, the leader coming in, placed second in the round for a $1,237 cheque.

In Saturday’s round of tough broncs, both Smith and Thurston bucked off, in fact the only cowboy with a qualified ride was Duchess, Alberta’s Cole Neely who covered Brookman’s rank NFR horse Kid Rock for all the money.

Sunday would be good to Thurston. Several Kesler horses were in the draw and Zeke capitalized on ‘Breakaway’ to turn in an 81 which was good enough for second in the round. Smith bucked off another Kesler horse at 7.5 seconds to open the door. With that, Thurston won the aggregate, and year end buckles along with a trophy saddle and over $5,400 at the finals. 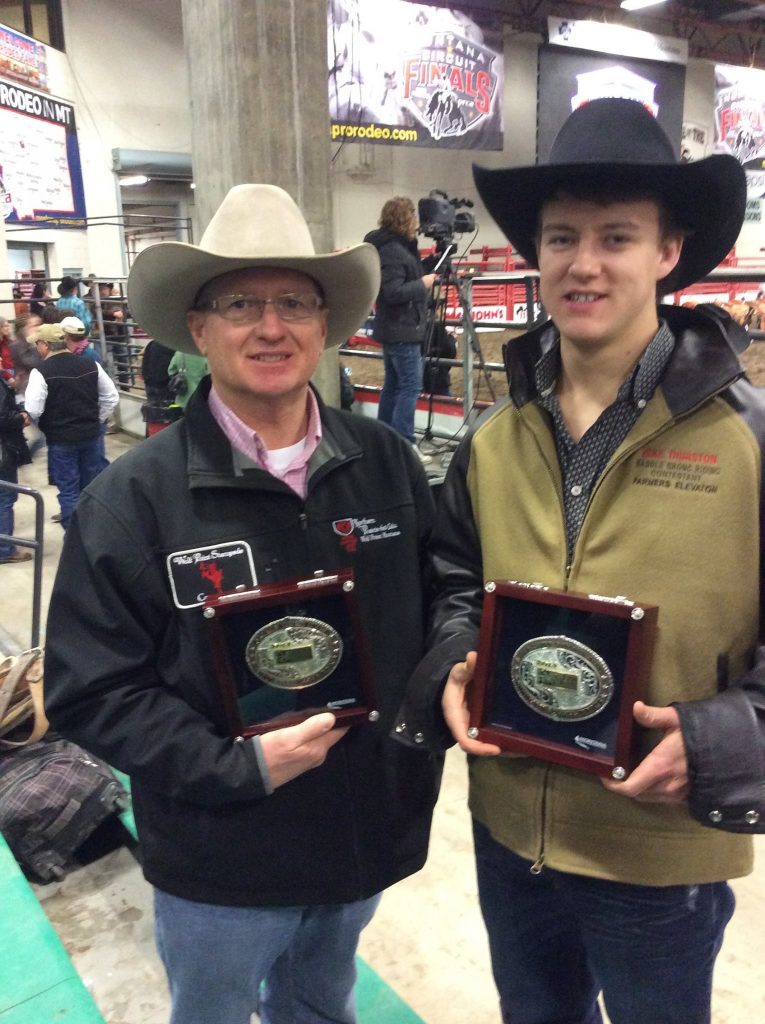 Zeke Thurston and Paul Seivers of the Wolf Point Stampede celebrate after Thurston’s win as Sievers bought Thurston in the Calcutta.

After the win Thurston was optimistic about his chances at big rodeos coming up like Fort Worth and San Antonio as well as the semi-finals for RFD-TV’s The American.

Thurston plans to “Stick to the basics and keep trying to let them know I mean business.”

After several years of injuries – a broken femur, broken ankle and hospitalization for pneumonia, Thurston knows his job is to show up and stay healthy.

Other Canadians alongside Zeke Thurston and Cole Neely at the Montana finals included Saddle Bronc riders Wyatt Thurston, who won third in a go round and fourth in the aggregate as well as BC cowboy Jake Watson and tie down ropers Ben Robinson and Logan Hofer. Robinson won second in the first round for $1,237 while Hofer placed in all three rounds and won second in the aggregate earning more than $3,500 for the weekend.

Sold out crowds were on hand for the annual event. Looking back in record books the only other Canadian Cowboys to win the Montana Circuit are Steer Wrestler, Clay Brower in 1987 and Marty Becker in the All Around in 2007. Thurston looks to be the first to ever claim a title at the Ram National Circuit Finals Rodeo in Kissimmee, Florida from March 25th to 28th.