Steve Turner wins Everything Cowboy Video of the Year

Calgary, AB: Last night in Carstairs, AB I presented Four Time Canadian All Around Champion Steve Turner with a bottle of Crown Royal and a couple Big Rock Beer Glasses for having the video of the year in 2012. That video now has over 16,500 views on it in a little over three weeks. My next closest video has about 5,000 views. A lot of those are thanks to the Western Horseman for sharing it and then having it shared from their page over 500 times. 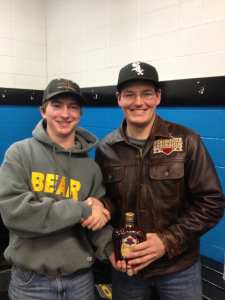 The video captured Steve’s mishap where he got bucked off in the Team Roping at Canada’s Ultimate Cowboy Challenge in Ponoka, AB on New Year’s Eve. He may have flown real high in the air, but he was alright upon landing. Even with that buck off, Steve won the Bull Riding and Steer Wrestling on his way to a second place finish.

If you haven’t seen the video yet, here it is once again. I find it as hilarious or better now than when it first happened.

Thanks to Wyatt Anton for taking this picture. Be sure to catch his show, Dirty Ol’ Country, every Monday from 12 to 2pm on 90.9FM CJSW. “Playing country music for people that like country music that doesn’t suck.”

For the Madden Muskrats and Everything Cowboy, I’m Ted Stovin.