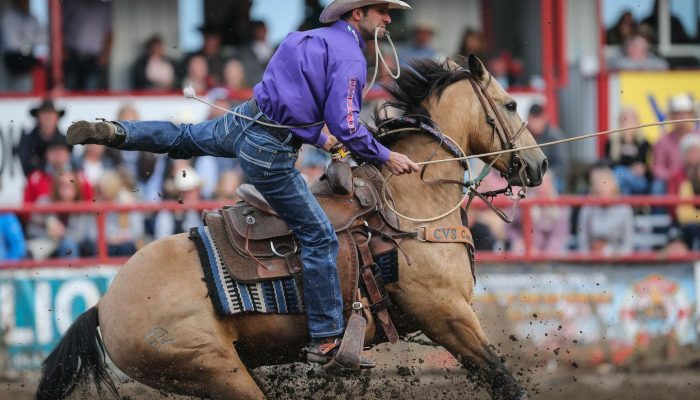 Ponoka Stampede Wraps Up for the First Time in Two Years

Cowboy Christmas has officially begun and there is no better way to kick off the summer run with one the the largest, richest rodeos in Canada, the Ponoka Stampede. After seven days of tough competition, only the best where left standing on championship Sunday. With past National Finals Rodeo (NFR) and Canadian Finals Rodeo (CFR) qualifiers, Canadian champions, and first time Ponoka Stampede competitors, it was a finals for the books.

In the Tie-Down Roping it was another American name very well known in Canada, Shane Hanchey. After a snappy 8.1 second run, Hanchey walked away with the Ponoka Stampede Championship title and second in the aggregate with $9750 won on two head.

Moving on to the Steer Wrestling was British Columbia cowboy, Stephen Culling. This wasn’t his first time in the Winner’s Circle and knew the competition was tough as well as what he had to do in order to walk away with the title. Making a snappy a 3.7 second run, Culling was smoking fast and $20,000 richer.

In the Saddle Bronc Riding it was left up to our tough, Canadian cowboys who have outshined the competition all year long. NFR and CFR qualifier, Layton Green, was absolutely flawless aboard one of Calgary Stampede’s great horses, Yesterday’s Delivery. Green originally thought he would not make it back into the final four, but upon earring that spot, he was poised to win it all. Green marked a 92.25 point score and anticipated this to be a good one if he stayed on.

“He is a ticking time-bomb, ya know, game on. You are probably going to be a lot or go down. He bucks really hard but he gives you a chance to win first”.

Green won second in 2017 but has been chasing this title for a long time.

“Since I was a little boy I have been coming here and I have always wanted to get the win here, it is pretty special”.

Barrel Racing was taken by the young-gun in her rookie year, Bayleigh Choate. At the age of 18 years old, Choate has already accomplished so much in her career. From qualifying for the Calgary Stampede after making two smoking runs at the Calgary Stampede Barrel Racing Qualifier, to now winning her first Ponoka Stampede. Choate had a 17.39 second run in the final four.

In the Team-Roping the hot team of Rhen Richard and Jeremy Buhler took the win after a snappy 4.6 second run in the final round.

Ending off the fantastic Championship Sunday was the crowd favourite event, Bull Riding. Following two buck offs, the crowd was holding their breathe when it came to Lonnie West and Jared Parsonage. West held the high score all week long and after a fantastic ride in the Long-Go, everyone had their fingers crossed when he cracked out of the chute. West’s has been on a roll this year so it was no surprise when they announced a 92.75 point score on Vold Rodeo’s 792 Hard Not to Get. West is currently sitting 7th in the Canadian standings and second in the PBR Canada standings.

These cowboys and cowgirls will continue this Cowboy Christmas with Calgary Stampede starting on July 8, Benalto, Coronation, and some more rodeos across the line including Cody, Wyoming.