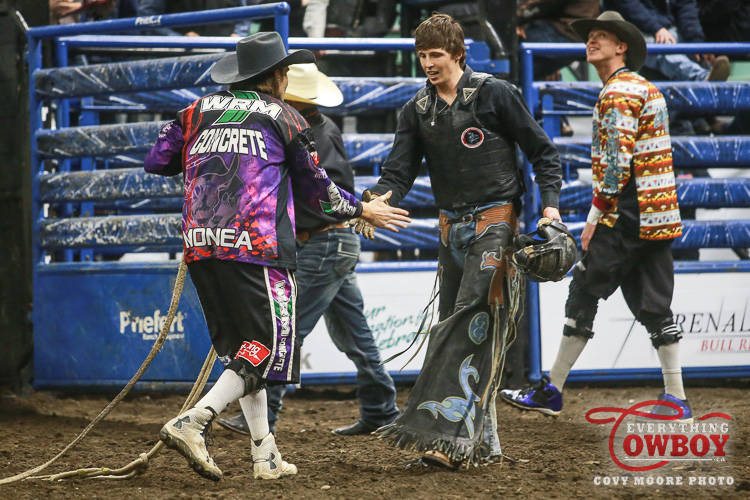 Brett Monea is one of Canada’s and arguably North America’s best bull fighters in the game. And his hard work is showing off with a massive run of PBR Velocity Tour Events in the United States during what many call the winter run.

Monea has been fighting bulls for 17 years. Now 34, he admits that as he watched his idols and mentors in Canadian Bullfighting retire he knew he had to do something to continue to learn and improve his craft. So he headed to hang out with Cody Webster, one of the United States most active and successful bullfighters to date this past December.

“I believe he is one of the best in the world. I went to see his view on things, his mindset and how he approaches the sport. You always have to be improving, in any sport,” Monea said.

“If you think you know everything in this sport, you should quit. There are always opportunity to learn.”

One move that might have come as a surprise to many was the fact that instead of just heading down on his own to soak up the knowledge and skills that Webster has to pass on on his own, Monea brought some friends as well. According to the many time Calgary Stampede and CFR bullfighter, just because on a technical level you are competing with other bullfighters for work and votes during the year doesn’t mean you don’t rely on those same guys each and every event.

“I asked them to come with me to Webster’s School because they are the guys that I will be fighting the most with this year,” Monea said

“I know they are competition in a way, but they are also my teammates. I fight with Ty Prescott at most of my rodeos and bullridings I go to. And Levi Hale is an up and comer who I think deserves to be at a a lot of these places and I look forward to fighting with him. So why not bring people along to improve and be at the best level together.”

That trip, coupled with a few phone calls set up this opportunity to not only just cross the border in the ‘States, but see a lot of that country. His planned stops with the PBR Velocity Tour include Portland OR, Youngstown OH, Grand Rapids MI, Edinburgh TX, Jacksonville FL, Dayton OH, Bangor, MN and Rochester NY.

Nerves or jitters weren’t a concern at the first couple events for Monea, but he admitted that it took a couple outs to get into the flow but also added that he finds himself very comfortable working with the bullfighters down south and is fitting in at each stop. The fundamentals of bullfighting don’t change, but there is a bit of a difference between the bullpower in the ‘States vs. Canada.

“With the bulls here in Canada the rider gets bucked off and I feel that bull is aggressive and want to get that guy. Bulls down there buck their rider off and keep bucking. You just have to be aware of your positions so they don’t buck into you,” said Monea.

“A bull is a bull, you have to treat them all the same. Took a couple to be comfortable, but once I saw how everyone rotated I fit right in.”

For a father of two, who owns property and raises livestock Monea doesn’t look past the sacrifices his wife Amy is making for him to go and chase this opportunity.

“If it wasn’t for an amazing wife, my wife Amy, I wouldn’t be able to do any of this. Amy is self employed, working hard, raising this family. For her to take the reins and put herself there even more so I can go chase my dream, my hat is off to her,” Monea said.

“We have a lot of things going on come the end of April, we will be calving. Things slow up down south so I can be home and take that responsibility of calving. For her to pull my weight and cover my ass, so I can do what I want to do and live this dream of bullfighting means a lot.”

In this sport, once you level up and start going to more prestigious events the opportunities get bigger. And now becoming a part of the Velocity Tour, Monea’s name will now appear on the ballot for the Velocity Finals with a chance to see the bright lights of the T-Mobile Arena in the long run as well. But Monea says the opportunity itself needs to be treated with the care and respect it deserves before worrying about chasing votes and making the big finals the PBR has to offer in the USA.

“To go down there and show that I belong and let it all hang out in the arena is the best part,” Monea said. “Votes or not, I get to say I went down there and did it.”