Starting off with a PBR that first year, VJV Slash was rode for the first time in two years that night by Cody Ford.  Visit the highlighted text for a throwback to one of the first few events covered by Everything Cowboy. I’m glad to see my writing has improved since then.

On December 31st, 2012 and 2013, Canada’s Ultimate Cowboy Championship was held in Ponoka and won by Jeremy Harden and Clay Elliot respectively.

For Lambert, once the new year rolls in he will be on a plane to Baltimore, MD to kick off the PBR’s 2015 Built Ford Tough Series. First though he will take on El Hombre from the Flying High Rodeo Co., a bull rode by Chase Outlaw for 88.5 points to win a day at this past summer’s Calgary Stampede.

Other favorable match-ups include: CFR qualifier Miles Pennington up against 2 Dark 2 C; Manitoba’s Steve Maddison on Rosin Fire also from the Wild Hoggs and Ashton Arychuk on the Indian Turtle from Vold Rodeo. $2,500 is up in prize money. Visit BullRidersCanada.com for the full draw and more.

8-time Canadian Champion Rod Hay has been organizing the bronc riding side of things where the 12 contestants ride for $2,000 without putting up any of their own money.

In both events, eight teams of stock, consisting of four animals per team, compete from eight different stock contractors for their share of prize money.

“We’ve got all the best,” Hay said. “It should be all uptown and the weather looks like it’s going to be good too.”

Tickets are $25 at the door or $15 for those 14 and under. A DJ will keep things rocking into the new year during the cabaret. 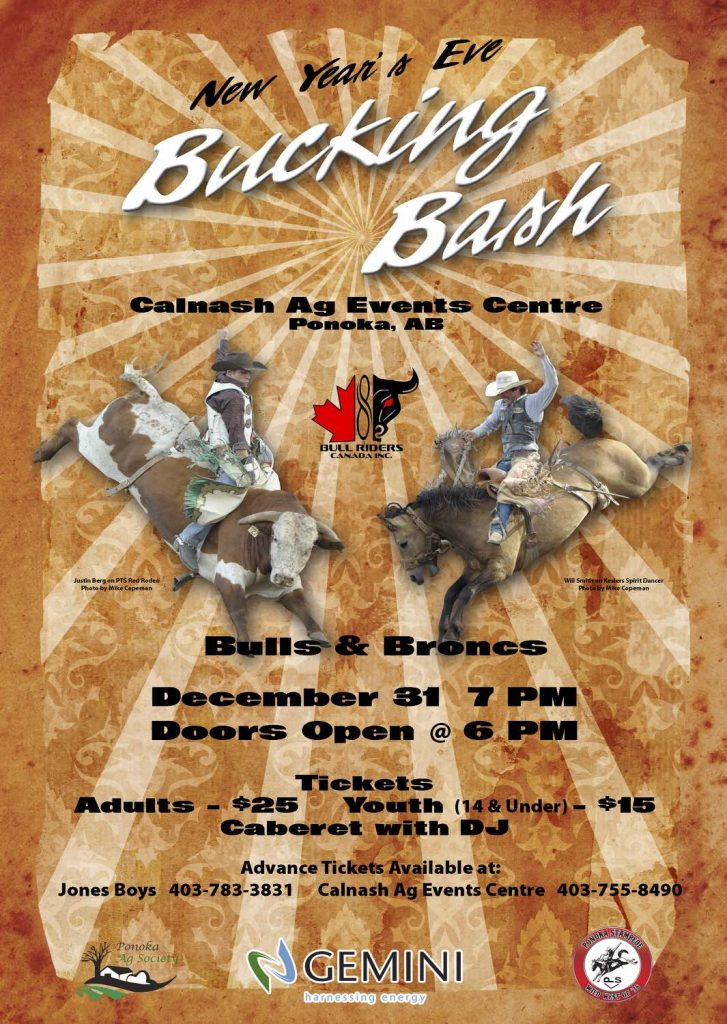