Spiritwood, SK: About one year ago now, nearly to the day, 2007 Canadian Champion Bull Rider Nathan Roy made his way out of a three week partially drug induced coma. 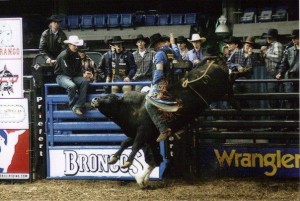 Nate Roy faces the Girletz Bull Canyonero at the 2008 PBR in Saskatoon, SK

After seeing his wife Dee right at his bedside, where she had been 18 hours a day for the entire three weeks, he wondered where his son Walker was.

Not long after Walker was there to play with his Dad.

“Dee said I had a big smile on my face and played with him for an hour or two. I think I even had a nap with him in my bed there too.” Nate said in an interview yesterday.

What happened to Nate last January took place while he was on his way to work on January 5th, 2011, the day before his son Walker’s first birthday. Nate was driving and his theory (because he and no one else knows for sure) is that he slightly hit a Moose which deployed the airbag and knocked him out. His truck then went into and knocked over a number of trees over before coming to a stop at a big spruce tree.

It was nearly two hours before anyone was there to help him.

Nate said that “I don’t remember much about that day or what really happened. I remember the night before a bit but that’s about it. It’s probably one of those things that’s forgot on purpose. Not that it would bother me much.”

His wife Dee wouldn’t quite agree, she wasn’t thinking it was as easy for her to wait that long even though Nate said he was just a little tired, that’s why he slept so long.

After coming out f the coma the trouble wasn’t quite over as Nate said “The doctors told Dee what the worst case scenario was so she was worried that way.”

“I recognized everyone right off the bat, so that was a good sign. Even if I couldn’t say their names, I knew who they were. I think we all have that trouble sometimes though. ” Roy joked.

When asked about what the first few weeks were like “I don’t remember a whole bunch of it.” He replied.

However after a few weeks in the hospital he got a bit stir crazy wanting to get out of the hospital because he thought he was fine.

He got out of the Royal Alexandra hospital finally after four weeks and was then sent across the street to the Glenrose rehab center for another four weeks.

After the precautions took in the hospital he was darn sure ready to get moving again.

“They were surprised with what I could do in such a short time.” Nate said

If there was anything that helped him in the rehab process it was being in such great shape before the accident as one doctor noted.

“You don’t know how lucky you are.” Another doctor told Nate throughout his recovery.

To this day Nate say his balance still isn’t quite 100%.

However he did say “It’s getting better every day and I’m gaining more strength and energy every day too.” 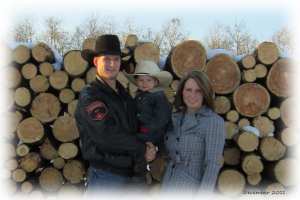 Nate and Dee wanted to add this section to take the time to Thank everyone along the way who helped them through their tough time last year as well.

For those of you who know Nate you will know him as a great competitor. He’s not just out there to make it as he would say, he’s there to win.

After last years accident however Nate’s life as a bull rider had changed for good in most people’s opinion.

In this story Nate would officially like to announce his retirement.

Most of us probably thought of this without question. Personally I did too. Once I was able to talk to him though and hear exactly what he had to say, it made tears well up in my eyes.

“I would have rather been able to leave on my own terms.” Nate told me that evening. “It would be silly, for me to get on again.”

Personally when Nate said he would have rather had it end on his own terms it made me think of the things that I take advantage of daily. I hope we can all take something from Nate’s story.

He may not ever ride a bull again, but Nate will always be one of the most respected Bull Riders in Canadian History.

Here is a list of Nate’s Career Rodeo Accomplishments: 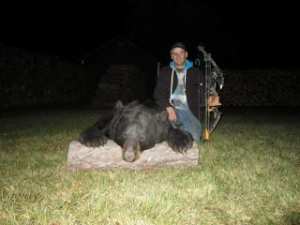 This great bull riding career was ended unfortunately by accident. Nate’s life in rodeo though is not even close to being over. Like all of us involved we know once we are in there’s no real way to leave it. We are in it for life. Nate bought himself a rope horse from his brother in law last fall. He plans to rope at home some, at some jackpots and he might even go to some CPRA Rodeos at some point too.

“It would be cool to win Canada in the Team Roping too!” He added in the same fashion he would take on any other challenge. “I’d like to pick up more too, I just don’t have the horsepower yet really.”

As for what Nate is doing now, at the time this story was written he was up working in Colklin, AB welding once again.

Bull riding may be over for Nate but there is a lot more out there for him at this point. Much more important things in his eyes he stated.

“Now it gives me more time to spend with my Wife and Boy to watch him grow up.”