McCoy’s Still Near The Top of The Race

“The Amazing Race” fans got to see a little more of Cord and Jet McCoys’ personalities during Sunday night’s ninth leg of the Season 24 marathon around the world for $1 million.

The brothers and four other teams began the CBS-TV reality series in Orvieto, Italy, and quickly made their way into Switzerland in the hour-long episode. That’s where The Cowboys fell behind. In fact, they got lost and were the only team to miss the first train to Chiasso, Switzerland.

“I found the train station,” Cord McCoy told his brother. “I just don’t know where we’re at.”

The McCoys asked for directions. The other teams reached their next destination of the ninth episode of the All-Star Edition of the race well ahead of the brothers. Once in Chiasso, the teams then took vehicles to the Swiss community of Altdorf, where they were to find Wilhem Tell, the legendary archer.

“Jet and I are kind of used to being the lone rangers,” Cord McCoy said. “It’s not really out of our comfort zone to be on our own and doing our own thing.”

Cowboy brothers Cord, left, and Jet McCoy must change into uniforms and clean a hotel room to meet Swiss standards in order to receive the next clue during the ninth leg of the All-Star Edition of “The Amazing Race,” which aired Sunday, April 27, on CBS-TV. (CBS PHOTO)

The first four teams – The Afghanamals, Leo Temory and Jamal Zadred; The Country Singers, Jennifer Wayne and Caroline Cutbirth; the father-son tandem of Dave and Connor O’Leary; and The Brenchels, Brandon Villeges and Rachel Reilly – all arrived at a statue of Tell in Altdorf, where a sign told them to wait until sunrise. In the middle of the night, the McCoys had arrived, so the teams began the next step in the race even.

The teams traveled to the Chapel Bridge in Lucerne, Switzerland, where a clue took them to Hotel Schweizerhof; they were to clean rooms that had been trashed by rock stars.

“We’re getting all suited up to go clean a rock-star room,” Jet McCoy said as he and his brother dressed in white shirts and a black bow tie. “We’ve never trashed a room that anybody knows about.”

Not only did the teams have to clean the rooms, they also had to be precise in regards to how the rooms looked. The inspector, a woman identified as Helga, made sure every step was complete.

“I’m really hoping my wife doesn’t see this,” Jet McCoy said as he ran a vacuum. “This is not something that I would generally do. Now she’s going to think I know how.”

It took three times before Helga approved The Cowboys’ cleanliness.

“Helga was cracking the whip today,” Cord McCoy said. “I mean, I would hate to have to work for her.”

Once Helga passed along the next clue, Jet McCoy responded with a hug. Of course, he seemed to be under considerable stress, as proven in one particular comment he made during one of Helga’s inspections.

“I feel like I’m in the principal’s office,” he said.

The Cowboys were the first team to the next stop at the Swiss Museum of Transport, where they had to identify a display. Jet McCoy recognized that the item was a giant trill bit, which was used to create the world’s longest tunnel.

Their next stop was at the museum’s Ford Mustang exhibit, where they picked out one of the five vintage vehicles and followed the directions of the clue to distinguish the model year of their particular Mustang – the brothers chose a silver 1967 Mustang because Jet’s young daughter is named Ti Silver. Once they figured out the car’s model year, they moved on to Oberrickenbach, Switzerland, where their next task had them fetching milk.

Cord McCoy handled the job for the brothers. He had to pick out a dog and a cart, then transport two empty milk containers to one of two dairy farms, which could only be reached by one of two gondolas. Once he found the farm, he had to exchange the empty containers for full ones, weighing about 30 pounds each. Then he had to return to Oberrickenbach via gondola and transport the milk to the truck via the same dog and cart.

Cowboy brothers Jet, left, and Cord McCoy must calculate the model year of a Ford Mustang using the corresponding kilometers of two different Swiss cities in order to receive the next clue during the ninth leg of the All-Star Edition of “The Amazing Race.” (CBS PHOTO)

“It was my turn for the Road Block,” Cord McCoy said. “If I’d known I was going to have to run up a hill with two cans of milk in the snow, it probably would’ve been Jet’s turn.

“Uphill in the snow, it gets heavy. You’ve got to grit it out.”

Heading to the milk transport with his canisters, Cord McCoy was in a race with Connor O’Leary to finish the task first.

“That was when I was glad I had a big, stout dog,” he said. “My dog was just trotting away, and I seen Connor over there trying to pull his to make his go faster.”

The teams were directed to drive to the town of Engelberg, where they took a large gondola to Mount Titlis, which was the site of the Leg 9 Pit Stop. Once on the mountain, the teams had to take another trolley to the top – on the final stretch, The Cowboys were joined by the O’Learys and The Afghanamals, and it was a sprint to the finish.

The O’Learys took the path of least resistance and won the leg. The McCoys finished second, followed closely by Temory and Zadren. Villeges and Reilly finished fourth, followed by Wayne and Cutbirth; even though they finished last, were saved by it being a non-elimination leg of the race.

Through nine episodes, The McCoys have finished second or better six times. They’ve won two legs and have finished as the runner-up four times.

There’s an ol’ rodeo saying that finishing second means a cowboy is the first loser. But in a race around the world for $1 million, it’s important to stay in the game. The Cowboys remain horseback for at least another week. 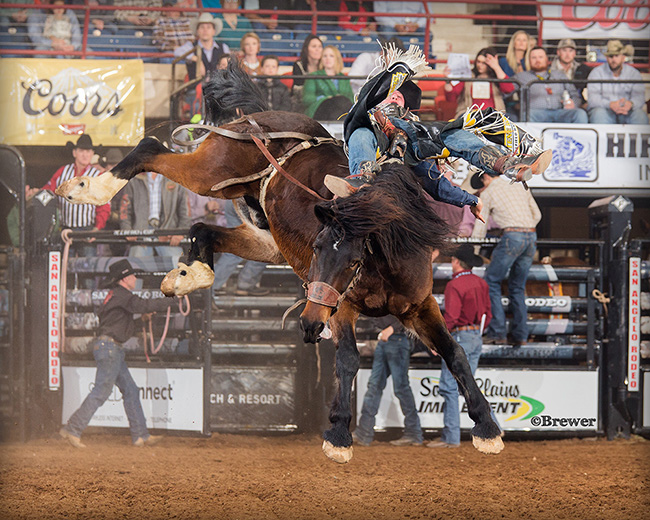