McCoys are runners-up on Leg 6

McCoys are runners-up on Leg 6

The sixth leg of “The Amazing Race” turned into a sprint for The Cowboys, Jet and Cord McCoy.

The brothers from southeastern Oklahoma are one of seven teams remaining in the race around the world for $1 million in the CBS-TV reality series now in its 24th season. They maneuvered through Sri Lanka on the Sunday, March 30, episode, then raced across a sandy beach to the finish line, finishing second to Leo Temory and Jamal Zadran.

“You always hate to win second,” Jet McCoy said. “It just kind of stings a little.”

The cowboys have finished at or near the top for half the race so far. They won two of the first four legs, then came in a close runner-up in the sixth episode. They know how important it is to do well, but the key is being the first to cross the finish during the 12th episode, the season finale. This marks the third time the brothers have been on a season of “The Amazing Race,” first in Season 16 in 2010, then again a year later in Season 18.

The teams started the sixth leg in Colombo, Sri Lanka, leaving the mat third in the early-morning hours behind the father-son team of Dave and Connor O’Leary and the country singers, Jennifer Wayne and Caroline Cutbirth. Their first stop was the Dutch Museum in Colombo, where they got their next clues.

“Jet and I are competitors,” Cord said as the duo took off. “I don’t know if we were born that way or just grew up that way.”
His brother agreed.

“That’s the sense of competition,” Jet said. “You’ve just got to keep stepping up your game. You’ve got to keep getting better every game.”

Since the groups left so early, they were all at the museum’s door when it opened at 8:30 a.m. They received their clues, which directed them to the train station and a trip to the town of Alawwa; each of the teams was on the same train and exited the train in Alawwa to find their first Road Block at a fueling station.

One member of each team had to place 3 liters of fuel into four correctly color-coded Tuk-Tuks, tiny three-wheeled vehicles that served as taxis in Sri Lanka – the Tuk-Tuks had to have a colored rectangle near the windshield that matched the color being carried by each team member. Cord handled the job for the McCoys and rounded up his four Tuk-Tuks in quick order. The next clue took the teams back to the train station, where they were to travel to the town of Rambukkana; all teams were on that train, too.

At Rambukkana, the teams traveled by Tuk-Tuk to the Millennium Elephant Foundation, a sanctuary for rescued elephants. That’s where they found the episode’s Detour: one half was Trunk, where teams worked with an elephant to move timber to a truck; the other half of the Detour was Sheets, where teams mixed elephant dung with shredded paper and water to make more paper.

The cowboys chose Trunks and were the first team to the Detour. Once there, they learned how to set the chain around the log so an elephant could carry the large log to the truck, then The Cowboys were to load smaller pieces of timber. Once they got six large logs loaded, they moved on.

“Growing up on a ranch, we’ve always kind of done those kind of things,” Jet said. “If I was going to tie a chain to a log, that would’ve been how I would’ve done it. I could see some of the other teams having trouble.”

The brothers were the first to accomplish their mission.

“The elephant would walk up there and wrap (a specialty piece attached to the chain) with his trunk, then lift it up with his mouth to where he could pick it up,” Cord said. “It was incredible.”

The McCoys left the elephant sanctuary first but were closely followed by Temory and Zadran. Their next stop was at the Ambepussa Rest House, where they listened to the playing of a flute-like instrument by a wise man. The brothers were the first there, too, and received the clue that took them to the Pit Stop, the finish line for Leg 6. 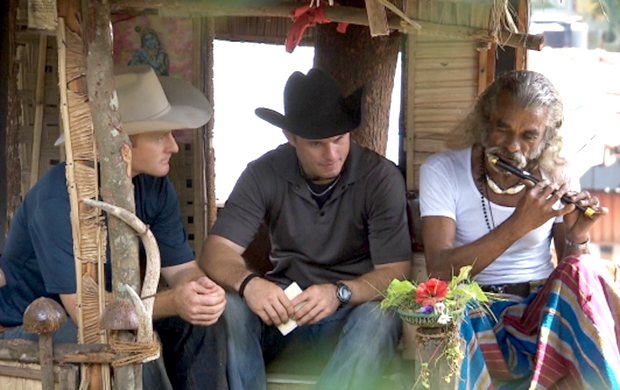 In this Route Marker, Cowboy brothers Cord, left, and Jet McCoy make their way to the Heritage Ambepussa Rest House before heading to the Pit Stop on the All-Star edition of “The Amazing Race.” (CBS PHOTO)

The teams’ taxis traded leads. Even Jet noted to his younger brother that they were going to have to race to the finish.

“I’ll outrun the slow one,” Jet said, joking with Cord. “You take the fast one.”

The McCoys’ taxi reached the Mount Lavinia Hotel Beach first. Then the race was on, with the Afghanimals taking the victory.

“We finally beat The Cowboys,” Zadran said, noting that it was the first victory for him and Temory this season.

The engaged couple, John Erck and Jessica Hoel, finished third in a close race with the O’Learys. The newlyweds, Brendon Villegas and Rachel Reilly, were fifth, and The Globetrotters, Herbert Lang and Nate Lofton, placed sixth. Wayne and Cutbirth came in last in the non-elimination leg of the race.

The show will be on a one-week hiatus with no broadcast on April 6 because of CBS-TV’s showing of the Academy of Country Music Awards. The show returns Sunday, April 13.