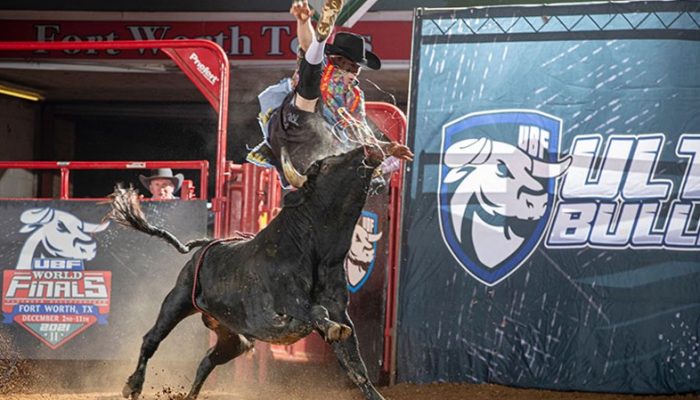 FORT WORTH, Texas – Coming into the 2021 Ultimate Bullfighters (UBF) World Finals in the No. 4 spot, Noah Krepps of Jasper, Arkansas, had a shot at the world title, but after being relegated to the redemption round, his chances were slim.

On Thursday night from the historic Cowtown Coliseum at the Fort Worth Stockyards, 11 bullfighters took their shot to make it to Friday’s Wild Card Round.

First up with the win in Round 1 was Calvert City, Kansas bullfighter Colby Lindsey with a score of 85 points. Former team roper Gus Kluttz(Mount Pleasant, North Carolina) took the first-place $1,000 check in Round 2 with yet another 85-point fight.

Krepps, meanwhile, edged Waller, Texas man Justin Martin by a point and a half at 88 and 86.5, respectively, to keep his world title hopes alive.

“I did feel the pressure coming into it,” Krepps said. “I had a little bit of hard luck, not the best performance last Thursday.”

Krepps put up the fight he needed, the highest-marked of the night against Bossman Delight of newly crowned 2021 UBF Stock Contractor of the Year B-K Ranch Fighting Bulls, but remains $21,000 behind World No. 1 Chance Moorman, who he hopes to join on Saturday.

“I kind of wanted to get down a little bit about it, but I knew that I had to keep clicking along, and I’m thankful for a second chance,” he said.

“When you start off things in a big way, that does give you confidence for the rest of your fight,” Robinson said. “It doesn’t always work, but it worked last week, and I came back and worked this week again. You’ve got to find that switch that you can turn on, and that jump is just my switch. If I land that, I know the rest of the fight is easy.”

Having come through the ranks of the UBF Development Camps this year, Robinson has put in the time and seen success at the elite level. On Day 4, it was a score of 82 points.

“It’s been six months of every day just putting in the work,” Robinson said. “And the thing that people think is that time equals success, but really it’s the work that you put in. You can have success in a shorter period of time if you just put that work in.”

With Lindsey, Kluttz, Krepps and Robinson moving on, they meet the other eight in Friday’s Wild Card Round. From there, the top four move on to Saturday for their chance at the top prize of $25,000 and their share of the $100,000 purse.

To compete in Wild Card Round on Friday, Dec. 10

Moving on to fight on Championship Saturday, Dec. 11 (Name – Score)

Action continues inside the Cowtown Coliseum on Friday, Dec. 10, starting at 7 p.m. CT with the Wild Card Round. Fans can watch LIVE on RidePass on Pluto TV, channel 720, starting at 8 p.m. ET. The UBF World Finals Pre-Show with myself, Ted Stovin, and my pal Wacey Anderson starts at 7:30 p.m. ET on the UBF and Wrangler Network pages on Facebook.

Tickets for the 2021 UBF World Finals are on sale now and can be purchased at CowtownColiseum.com and PBR.com or through PBR Customer Service by phone at 1-800-732-1727.

General Admission tickets start at $15 for adults and $7.50 for children ages 11-18, taxes and fees not included. Children age 10 and under will be able to enter the 2021 UBF World Finals for free.

For a more close-up experience, fans can also purchase Silver Spur Seats for $35, VIP and Gold Buckle Seats for $45 and Dirt Seats for $55.

All ticket buyers will also be able to partake in nightly post-event autograph sessions and meet-and-greets on the dirt with some of the top bullfighters in the world.

For more information about how to attend the 2021 UBF World Finals at Cowtown Coliseum in Fort Worth, Texas, Dec. 2-11, visit PBR.com.

Official results from Day 4 of the Ultimate Bullfighters World Finals from the Cowtown Coliseum inside the history Stockyards in Fort Worth, Texas, on Dec. 9, 2021. (Name – Score, Payout)