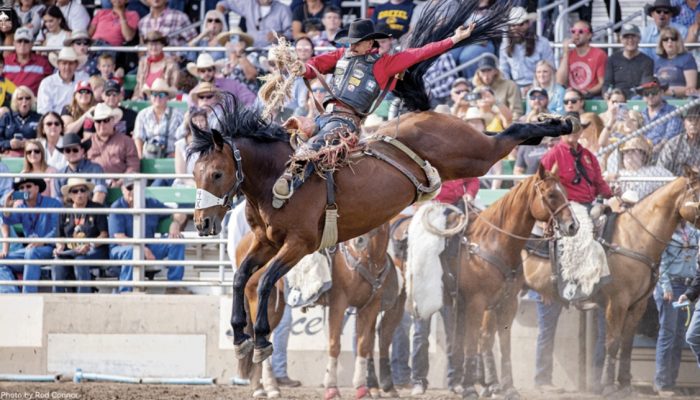 By JOLEE JORDAN, Special to ProRodeo.com

After spurring Sankey ProRodeo & Phenom Genetics’ Black Tie for 90 points during the short round of the 2022 Round-Up to clinch the championship, Wanchuk’s profile could add a couple of exclamation points to that statement.

Wanchuk’s march to the title began with a long round match-up with Brookman Rodeo’s Pretty Woman.

“I didn’t know much at all about that horse,” Wanchuk noted. “He came out and acted like he was going to just be good.”

“Then he hit that grass and really got to bucking. He did some cool stuff,” Wanchuk laughed. The Round-Up is famous for being held on a football field, complete with grass and cowboys littering the field to watch the action. “I was thankful to get back to the short round.”

Wanchuk’s 84.5 point first go effort tied him for fourth in the round and set up the match-up with the legendary Black Tie.

“That’s one I’ve been waiting to see next to my name for a long time,” Wanchuk said. “I watched my hauling partner Tanner Butner win Sheridan on that horse, so I was pretty excited.

“It was a bit different from his usual trip. He took some different jumps and then just got to hanging in the air. He was about all a guy could ask for.”

One tradition of Pendleton is that champion’s climb aboard their brand-new championship saddles and take a victory lap around the Pendleton track.

“It was unreal,” Wanchuk said. “They said there were 16,000 people there today and they just about got the wave going when we did our victory laps.”

Wanchuk scored 174.5 points on his two broncs, slipping past his other traveling partner, Sage Newman, the PRCA | RAM World Standings leader who won the long round. The earnings were crucial for Wanchuk, who came to Pendleton ranked 11th as he seeks a second consecutive Wrangler National Finals Rodeo qualification.

“It sure makes you feel a little easier about it,” Wanchuk said of the standings bump. He’ll finish his 2022 season next week in Edmonton, close to his Sherwood Park, Alberta home. “I get to end the season at my hometown rodeo.”

With the Finals made, Wanchuk will take a little break and do some hunting to refresh before starting the 2023 season with Newtown, North Dakota next month.

“I like to take a little break, head out to the bush,” he said.

Wanchuk will compete at the Canadian Finals Rodeo prior to the Wrangler NFR and is looking forward to an exciting trip to Vegas.

“It’s nice, I was close for a couple of years and didn’t quite get in, so it was a bit of a sigh of relief last year,” he said. “It’s shaping up that our whole crew, Sage Newman, Chase Brooks, Tanner Butner and myself might be there and there’s also six Canadian bronc riders in there.”

“The NFR should be a lot of fun,” he said. Asked what he’s taking from his first experience a year ago, he said, “I think I’ll be more relaxed. Just go do my job and not get too worked up about things.”