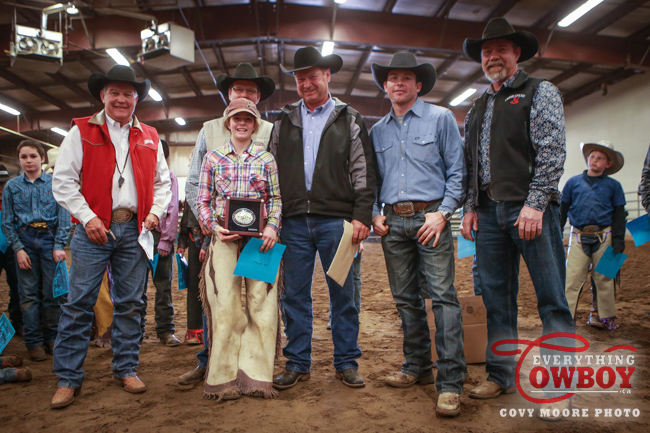 You won’t find an ad in the newspaper or on the classifieds board at the local corner store, but that hasn’t stopped the success or popularity of the Johansen Brothers Steer Riding School held last weekend at Olds College.

Despite that lack of advertising, the school has provided the background for more than 500 qualifications in multiple events at the Canadian Finals Rodeo in its 38 year history.

The school was started by the Johansen Brothers as a way to give something back to the sport that had treated them so well. Don Johansen is a nine-time Canadian Finals qualifier, and champion in the bull riding in 1978. The family dominated the bull riding ranks in Canada during the 1980s, with Bruce taking home the Canadian title in 1980, Dale in 1983 and 1984 and Guy winning the title in 1987. Along with his brothers the school has been a labour of love since its inception for the Johansen clan. 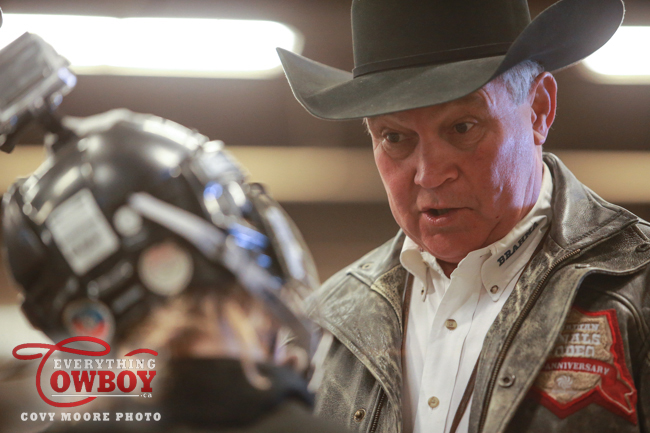 Don Johansen speaks to a student after a ride.

“I didn’t think 38 years later we would be putting on the school. I love it. I love these kids. It is sort of my way of giving back to the sport that has treated me so well,” Don said.

The primary goal of the school is to give youth the opportunity to learn the absolute basics of riding a steer, but more importantly the safety factor in doing so properly.

“There are 100 ways of getting hurt riding steers. And you can cut it in half by getting on right in the chutes, and getting off right,” he said. “It gives a kid the chance to know if he is a steer rider or not.”

Johansen says that the incredible stock provided to the school is certainly one of the reason so much success has come out of the school. A tame, but still slightly bucky herd is provided to the students, who range from age 9-14.

“Just putting kids who have never been on and slamming them to the ground, it never works. It is a million dollar steer for those kids.”

In 2013, the Johansen Brothers invited another champion of the Canadian bull riding scene to come and teach with them. Ironically, he was a student of the school in 1991 and 1993, and has won championships in Canadian rodeo competition as well as PBR Canada. 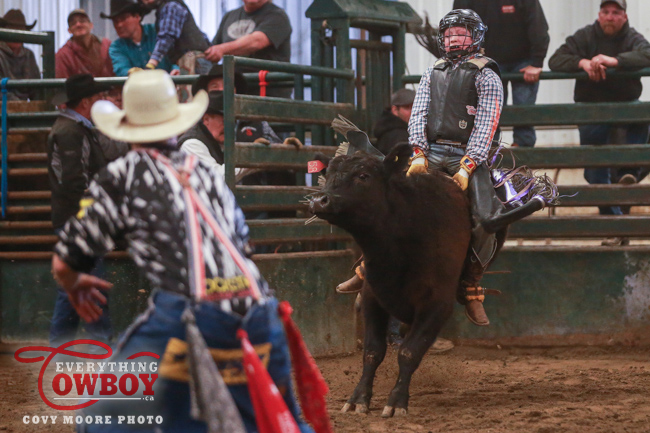 A young rider bears down on a “bucker.”

“I know what it meant to me, and what it did for me,” said Strathmore’s Scott Schiffner.  “Not too many guys get the opportunity to give back. It is one weekend out of my year that I would pay to do. Look at these kids. There is no better feeling than getting a kid on. It doesn’t matter if it walks, stops, or rides a bucker and they get off and their eyes are huge, its the greatest feeling ever.”

The addition of Schiffner to the roster of teachers certainly brings another set of gold buckles to the fold, but Johansen said the decision to involve Schiffner was to ensure the school moves down the road another 38 years.

“I want this school to continue another 38 years. I won’t be here but Scott, my son, Dale’s sons, Bruce’s sons and Jack’s son, they might be here,” he said.

Schiffner echoed Johansen’s comments about teaching the absolute basics of riding a steer, and emphasized that the school is not aiming to turn out 30+ future bull riders each year.

“The biggest thing we work on here is giving them a good experience. We are not trying to build world champs in three days. A lot of these kids here will carry on and come back next year and the year after. A lot will carry on and ride steers, but some of them don’t. We want the ones that don’t to still have a great experience and go on and tell their friends about it. They are the future fans of rodeo…future sponsors,” Schiffner said.

“If you don’t give them that good experience now, they might leave and go to golf, or do something else and want nothing to do with it. We are just trying to build cowboys. We work pretty hard on making sure we get these kids to look us in the eye, shake our hands. We are trying to build cowboys that carry on to be involved in rodeo and hopefully good people.”

“The biggest thing I remember was having a Canadian Champ, well four of them, in the arena and walking up and giving you their undivided attention. You can never say there are very many people who get the undivided attention, even from a short time, from the absolute best there was or have been.”

Each year, the event holds an afternoon jackpot on the final day, giving the students a feel for competition. Scores are not based on the animal’s performance, but the student’s display of the basics of riding, but most importantly the safe way to get off.

This year, four students were recognized in four categories. Most improved over the three day school was Kegon Bishell. The students were split into three groups, based on age and experience. The ‘C’ group champion was Jake Kool, ‘B’ group champion was Cauy Schmidt. The final group represented some currently competing CPRA steer riders, as well as a young lady Sarah Edwards, who ended up claiming the win and collecting the title in the ‘A’ group.