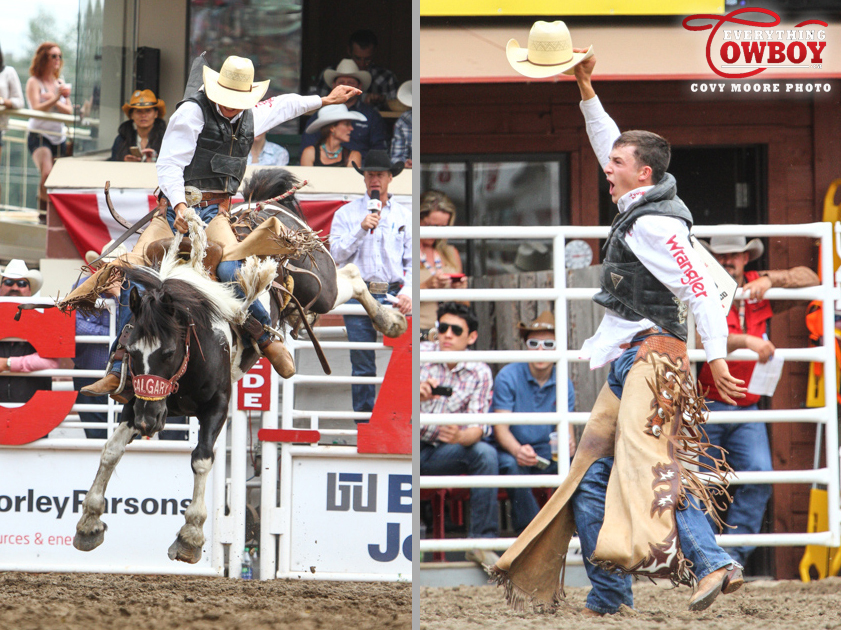 Houston champ Clay Elliott takes it one bronc at a time

Clay Elliot, 22, won more than $50,000 this past weekend, covering six broncs in six days and battling out of a competitive wildcard event to take the event win in Houston.

The Nanton, Alberta cowboy is aiming for the Wrangler NFR this season after a strong performance at Houston, and a good chunk of change to help him down the road.

“I love riding bucking horses, and if they are going to pay me to do what I love, thats awesome. The more I enjoy it the more I win. Its getting better and better, I can’t get enough of it,” Elliott told Everything Cowboy.

The road to the championship for Elliott wasn’t without it’s challenges. He bucked off of Calgary’s Gross Beetle in the first night of his “Super Series” March 13-15. Winning third on Three Hills’ Dixie Cup, followed by splitting second on Mo’Betta Rodeo Company’s Shasta, Elliott had enough to come back in the wildcard round.

That wildcard event was held on March 18, and Elliott took home an 86 score and the win on Vold’s SunGlow. With that win, he qualified for the championship round the following night.

Placing in the top four is the aim for the competitors who qualified for the championship round, who then come back for a four-man shootout. Third place on Cervi Championship Rodeo’s Vitalix the Natural sent him to the final four where Calgary’s Stampede Warrior awaited.

“That horse is consistently awesome,” Elliott said about Stampede Warrior.

“I won third in the ten round and I remember seeing the placing of what horses are in the next round. All of them were good draws, but I remember seeing Stampede Warrior was the third man coming back, so I was really happy to have him.”

An 87 score and a tie with Rusty Wright would make it an even tougher task as the two moved on to a ride off. Wright was the same cowboy who Elliott rode against to win the 2012 Calgary Stampede Novice Saddle Bronc Championship.

“The horse I got in the ride off was called Dancing Girl. That horse was all there too,” Elliott said.  “I had too much reign and that horse is dang sure a bucker.”

An 85 score bested the efforts of Wright, and gave the young Canadian cowboy the event title.

“You have to have a short term memory in rodeo. After bucking off my first one, I didnt think I would be where I am now, but I didn’t carry that on to my next horse, and I won’t carry it to the next one,” said Elliott.

Being able to win such a large purse at the event, Elliott admitted that it makes for good seed money for a cowboy headed into a busy year of rodeo, but added that with the recent rise of organizations like the Elite Rodeo Athletes (ERA), and events like Houston and The American, the future of rodeo is looking bright for a cowboy trying to make a living.

“This rodeo deal is changing for the better. We have this ERA deal where they are trying to get rodeo to be a professional sport. It’s trying to get us treated the way football players and hockey players are treated,” said Elliott.

“I am neutral as to who is better. I do know that what the ERA is doing in trying to make rodeo a better sport is awesome. It’s getting us that much closer to being a sport like hockey or football. The way rodeo is headed is very very bright.”