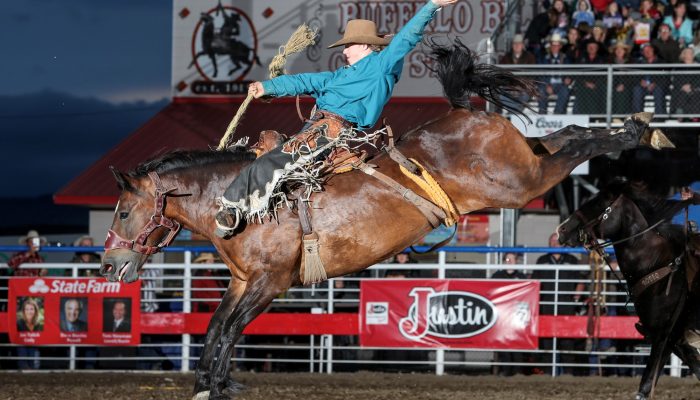 Dawson Hay took the lead in the saddle bronc riding at the Cody Stampede on Wednesday night. He rode Mo Betta Rodeo’s Sue City Sue for 89.5 points. If that holds, he will be the third member of his family to earn a title at Stampede Park. Photo by Andy Watson/Bullstockmedia.com

CODY, Wyoming — The next generation of Canada’s Hay family is hoping to keep his family’s success at the Cody Stampede going in 2019.

Dawson Hay, from Wildwood, Alberta has the highest marked ride in the saddle bronc riding after three performances. Hay rode Mo Betta Rodeo’s horse Sue City Sue for 89.5 points. He is now one point ahead of Cort Scheer from Elsmere, Nebraska who has 88.5.

Rod Hay and his brother Denny Hay are both title holders from the Cody Stampede. Rod who won in 2004 is Dawson’s father. Denny left the Cowboy State with the title twice in 1996 and 1997. Both of these men qualified for the Wrangler National Finals Rodeo numerous times. Now, it looks like Dawson could be headed there as well. Prior to the Cody Stampede, he was ranked 13th in the Professional Rodeo Cowboys Association world standings and even if he doesn’t stay at the top of the leaderboard, he stands to get a big check here.

In the team roping it was Lane Ivy from Dublin, Texas and Cesar de la Cruz from Tucson, Arizona that had the fans cheering. With Ivy roping horns and de la Cruz catching feet, they stopped the clock in 4.5 seconds to take the lead.

The final performance of the 100th Cody Stampede starts at 5 p.m. July 4th. The Centennial champions will be determined and more than $350,000 in prize money will be paid across the events at the conclusion of that performance.

Courtesy of the Cody Stampede