I had the wonderful opportunity to visit Kauai, Hawaii (July 12-20) during the 16th Annual Koloa Plantation Days celebration. Thanks to my friend Taylor (hey girl!), who loaned me two talented horses so that I was able to enter the rodeo. The event gave whole new meaning to Hawaiian style! 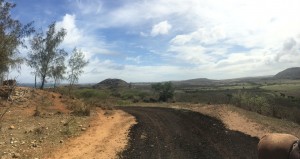 The set up: CJM Country Stables Which is located right on the beach of Poipu, Kauai. 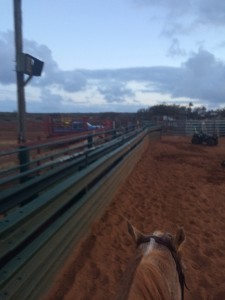 View from inside the CJM Arena

Poo Wai U’: This was something truly Hawaiian. A giant metal Y is buried at the oppostite end of the arena than the rope chute. Muley cattle are outfitted with Handi-horns  and the roper backs into the head box. When they call for the steer, the roper must rope it slick around the horns. Slick horns is the only legal catch. From there the roper pulls the steer to the Y and flips their rope over one arm of the Y. At this point their horse must pull the steer tight to the base of the Y, the roper dismounts and runs to the steer, where they tie the animal around the neck to the base of the Y. Fastest time wins. It’s like a crazy cross between team roping and calf roping. As you can imagine there are plenty of wrecks!

Double Mugging: This event consists of a two man team, a roper and a mugger. Muleys are used in this event as well. The roper calls for the muley and must rope the animal at which point the mugger runs to the muley and mugs it. The roper then dismounts taking his rope with him. Then both team members wrestle the muley to the ground and one member ties all four legs together. Fastest time wins and similar to calf roping the muley must stay tied for 6 seconds. This event is not for the weak of heart.

Whaine Steer Undecorating: The Ladies version of steer wrestling. A steer is outfitted with a ribbon/tape on the length of it’s back. The female contestant is in the head box and her hazer in the heel box. When she calls for her steer she must reach down and pull the ribbon/tape off the back of the steer and raise it above her shoulder, thus signaling the end of the run. Fastest time wins.

The Contestants: Unlike mainland rodeos, which have separate rodeos for youth, high school, and aged competitors. Kauai offers one rodeo with several events. This rodeo has contestants as young as 5 and several competitors over the age of 60. It truly is a family style event. 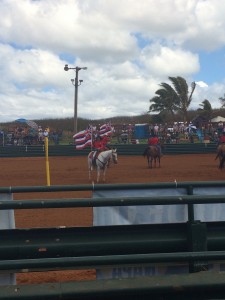 Most horses on the island have more than one job, which is why they are all so good minded! They run barrels, rope both ends, and pull a steer in Poo Wai U’. The versatility of the horses also shows the handiness of the Paniolos in Hawaii. I could learn a thing or two from the crowd down there, all-around truly means all-around. These cowboys and cowgirls went all weekend, criss-crossing the arena and throwing down some serious competition. 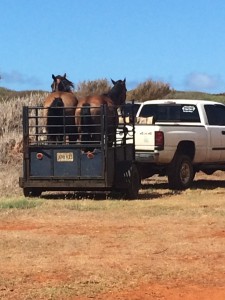 The Atmosphere: I had already mentioned the family atmosphere of the rodeo but the general feeling of welcome is another thing to note. As a sunburned blonde in a sea of tan skin and dark hair, it was obvious I wasn’t local, but from the cheering and encouragement I got on each of my runs you would have thought I had lived there all my life. A characteristic I’d like to see adopted on the mainland.; the feeling of welcome and no judgement!

Anyone who has a taste for rodeo or just a general love of perfect weather and the beach should head to Kauai!