GREAT FALLS, Montana — Last month, Gary Rempel was selected for and worked his eighth National Finals Rodeo. Since the pick up men have been voted on to work the finals, Rempel has been voted in more than anyone else.

This article comes from Scott Marsh of the Great Falls Tribune, I asked him if we could publish it here and he said that would be alright.

To view the original, visit this link.

Editor’s Note: Gary Rempel on Saturday night completed his eighth National Finals Rodeo as a pickup man. The Saskatchewan native has lived in Montana for many years and is well-known to the state’s rodeo community. He was selected to work the NFR in a vote of professional cowboys. Rempel, who has also been picked a record 16 times to work as a pickup man at the Canadian National Finals, lives in the Fort Shaw area with his wife, Jody. They were in Las Vegas the last two weeks, which is where we caught up with Gary for our Sunday Conversation.

Question: Is it still as much fun to be in Las Vegas, Gary, even though you’re working?

Answer: Yes, it’s always fun (laughs). I missed (the NFR) last couple of years. The deal with Vegas is, once you’ve been here you really want to go back. So I was really looking forward to it this year.

Q: A lot of us focus on the rides so much instead of the guys like yourself helping protect the cowboys. Do you feel a little under-appreciated sometimes?

A: You know, we don’t get much publicity, but I know darn well the cowboys appreciate it. And that’s basically all that matters.

Q: I recall a few years ago in Canada, Gary, when you had to go up in the stands and get a bull. Does that remain one of your most memorable pickup moments?

A: Yes (laughs). That was a little exciting.

Q: Tell me about that. What happened?

A: Well, a bull bucked a guy off and came down around. Our job during the bull riding is if the bull won’t leave the arena to rope him and get him out. Just as he was going by me I roped him, and just about the same time he jumped (clean out of the arena). Surprised the heck out of me. But it worked out OK. I already had roped him. He made it over the panels on me but I got him dalleyed up and pulled back. Then of course all the cowboys and crew pulled the panels apart and we got him back in the arena.

Q: Nobody was hurt, right Gary?

A: One lady got walked on a little bit. I think she broke her collarbone and stuff like this. But that was the only one. They took her off on a stretcher but she was waving the crowd when she left. It was nothing serious.

Q: Where was that?

A: It was the Canadian Finals in Edmonton. 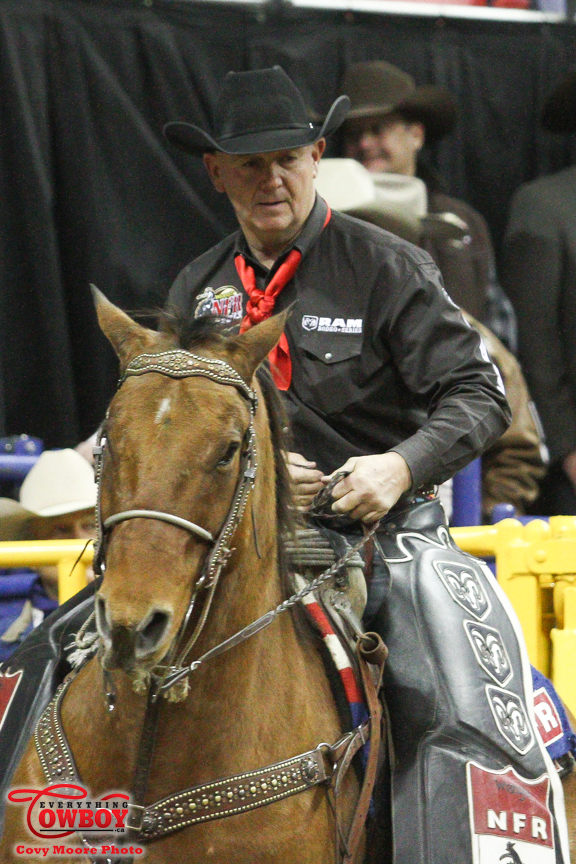 Q: Tell me about yourself, Gary. Were you a professional cowboy back in the day.

A: I grew up on a large ranch in Saskatchewan called the Matador. I roped calves and team roped for quite awhile. My dad was a pickup man for years so I kind of followed in his footsteps.

Q: And what’s the history of your move to the Fort Shaw area?

A: I was picking up in Calgary and in the Northwest and I met Jody. We ended up after awhile getting married, and we picked Montana as a place to live. We didn’t know anybody except for one couple. We stayed around their place until we got situated and we’ve been here ever since.

Q: How long have you lived here now?

A: Twenty-one years. We live up on Highway 89, straight north of Fort Shaw. We’ve got 160 acres and just enough pasture land to keep a few horses.

Q: You’ve been so successful as pickup man in Canada and at the NFR, have you also done a lot of work for our Montana Circuit?

A: Yes. I used to do a lot of rodeos for the Keslers, Brookman and Sankey (stock contractors) in Montana. I’ve worked the Circuit Finals in Great Falls eight times. But right now I also work Denver (Western Stock Show) and conflicts with the Circuit Finals.

Q: I’m sure you feel honored to be selected to work the NFR.

A: For sure. I missed the last two years and I was starting to worry a little bit that they were phasing me out. But to get it again is a real honor. I was happy about it, put it that way.

Q: What’s the hardest thing about being a pickup man?

A: I guess the hardest thing is keeping good horses under you. If you’ve got good horses, the easier it is to do your job.

Q: You’ve got a great one, I understand.

A: I’ve got a good set of horses right now. I’ve got six of them down here in Vegas with me. Four are real good ones and a couple of fill-ins if I need them. I’ve been really happy with them. They’ve been working awesome.

Q: How many horses will you typically use in a performance?

Q: Is the bull riding more dangerous for pickup men than the other events?

A: We don’t have to rope a lot of bulls down here. Most of these bulls have been around enough that they know the routine and where they’re supposed to go. But you do have to be careful. If one does come at you, you don’t know if he’s hooky or not. You certainly don’t want to get your horse hurt, and that’s the biggest concern in the bull riding.

Q: Can you allow yourself to really watch the rides and enjoy them, or are you too worried about what you’ve got to do to be able to take in the rides?

A: You see, yes you do. A certain amount of it. But I have to focus on where I’m going to be when the whistle goes. A lot of time you know when a good bronc ride’s going on, but you just can’t allow yourself to zero in on it.

Q: Do you find yourself cheering a little bit for the Montana cowboys down there in Vegas?

A: Yes, I do … Being a Canadian I was really hoping Straws Milan (of Cochrane, Alberta) would do well in the bulldogging. But he’s had a tough week. But yes, I do. I’ve got my favorites, too.

Q: How many rodeos did you work last year?

A: I’m gone from May through the end of September and into October. And then from January until the end of March. Home for a month and a half and start all over again.

Q: Man, you’re on the road as much as the pro cowboys, aren’t you?

A: That is the biggest problem with me right now. I like the rodeos and I still enjoy picking up, but going to them all is kind of a pain. I don’t like that driving anymore. 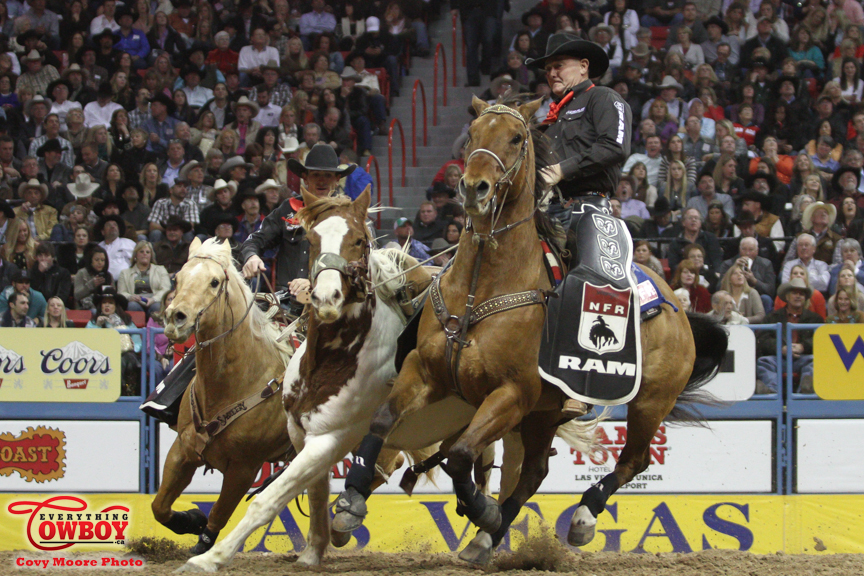 Q: What’s the best thing about being a pickup man?

A: I really enjoy riding good horses. People are continually coming up and talking to me about my horses and how good they are, and I like that. We have friends everywhere we go, and it’s always good to see them. It’s just a good life.

Q: And I’ll bet when there are incidents and a cowboy needs help, and you do help, it has to make you feel good, right?

Q: Tell me about your horse “Rainbow.” I understand it’s a famous horse of yours.

A: He’s pretty awesome, that horse is. I bought him off the Broken O Ranch (near Augusta) when I went to work there years ago. I got him as a 4-year-old and starting picking up with him the year he turned 5. Ever since there haven’t been very many times when he hasn’t been in the trailer when I left home. He’s been to every NFR I’ve been to. He’s 24 and he’s still awesome .

A: How do I describe Rainbow?

Q: He’s kind of a chestnut roan is what he is. But right now he doesn’t show the roan. He’s just basically a chestnut. I’ve been using him as the second horse in the bronc riding.

Q: And Rainbow is 24? Well, it sounds to me like you’ve both got a lot of NFRs left, you and Rainbow do Gary.

A: (laughs) Well, I don’t know. He’s starting to show his age and I suppose I am too. I think this might be his last one. But even right now he’s the best horse I’ve got. He’s so nice and hardly ever does anything wrong. He’s pretty cool.

Q: I wish you’d been back at the State Fair Rodeo (now the Big Sky Pro Rodeo Roundup) way back when that time old Skitso Skoal jumped completely out of the arena. I mean we could have used you that day, Gary. I was there.

A: I heard all about that (laughs). Apparently she jumped into the beer gardens or something, didn’t she?

Q: Well, I was working you understand. So I wasn’t in the beer gardens! But I was close and I saw her come bucking underneath the grandstand and heading for the beer garden. It was something to see.

A: We had a wild cow in the cow milking in Pendleton two years ago that kinda got out and got over near the beer tent. So they hollered at me and I rode into the beer tent area with my horse. I got in there and bunch of these drunks had already rassled the cow down and were sitting on her. And the first guy I see is Jesse Kruse. He’s standing by the bar having a beer and he hollers ‘Hey Gary, you want a beer?’ So I figured as long as I’m in here I might as well have one and I sat on my horse and had a beer (laughs). The whole thing was pretty funny.

Q: A lot of folks in Great Falls are proud of Jesse, the only world champion from our town, of course. And a lot of us hope he makes it back to Las Vegas next year, Gary. I hope you do, too.

A: I sure do, too. I hope we both are. The same with Tyrell Smith (of Cascade). Both of those kids, I wish they were here this week riding. They’re great.

Q: Nice talking to you, Gary.

A: I really appreciate the call, Scott. Thank you.