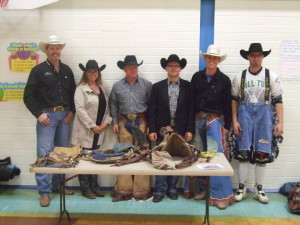 RED DEER, AB -“The cowboys are here!” echoed through the halls of G.W. Smith Elementary on September 26th when the Foothills Cowboy Association made their appearance to raise awareness about their upcoming FCA Cowboy Classic Finals October 11th to 13th at Westerner Park.

Over 330 children were in attendance to learn the history of rodeo and participate in a question and answer period along with mini rodeo events. The students learned about barrel racing with the help of stick horses and collapsible barrels. A coloring contest is currently being held and the kids received their free rodeo tickets to Saturday’s Children’s Day and afternoon rodeo performance. 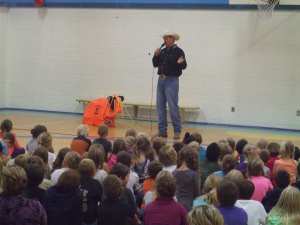 “The entertaining part was the question and answer. Some of the question those kids came up with made us all laugh,” said FCA Director and Judge, Pat Dillman.

Entertainment continued that evening at Billy Bobs in the Sheraton Hotel where the stock draw was held. A large crowd of cowboys drew their finals stock from a hat, watched by a crowd of on-lookers and fans.

With $96,000 in added prize money at the upcoming finals, contests were at ease to learn that entry fees were paid for by a generous sponsorship from JP Completion Tools and Tagline Safety, a new addition for this year.