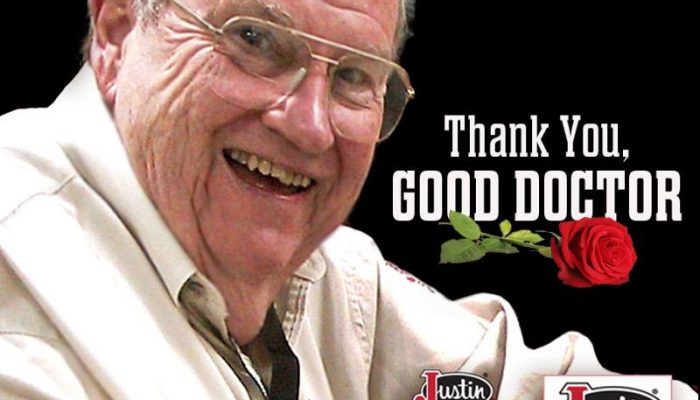 Deeply respected and loved by his family, friends and the thousands of athletes whose lives he touched, Dr. J. Pat Evans passed away peacefully Monday July 22nd at his Dallas home.

Evans, a Native Texan, was born August 5, 1930 and raised in Dallas. He was a devoted Christian, spending summers as a youth at Young Life camp in Colorado.  In 1947, following in the footsteps of his father, Evans served as Lodge Chief for Boy Scout Troop 42. He was one of the first to help settle Camp Constantin and instigated the long-standing ceremony of a torch-lit canoe paddle across Possum Kingdom Lake.

He attended Whitworth University in Washington on a football scholarship.  The disappointment of suffering a severe knee injury ultimately led Evans to discover his true passion at an early age. Now sidelined, Evans became the team’s Student Athletic Trainer. Upon graduation he promptly attended the Grady Vaughn School of Physical Therapy to further pursue his career in working with athletes.

Evans began his career at Baylor Hospital as a Physical Therapist. His success there soon led the department head to ask him why he didn’t just go to medical school and become a doctor.  Never one to ignore good advice, Evans graduated from the University of Texas Southwestern Medical School in 1959, interned at Baylor University Medical Center and was promptly offered a staff position.  He practiced at Baylor Hospital for over 30 years.

Staying true to his original passion Evans was one of the very first surgeons in the U.S. to focus solely on sports medicine. He fought to have his category of “Sports Medicine” recognized as a subspecialty by the medical community. He was the Team Physician for the Dallas Cowboys from 1970 to 1989 and the Dallas Mavericks from 1980 to 1992.

In 1979 Evans was introduced to the world of rodeo by Walt Garrison who was both a Dallas Cowboy and rodeo cowboy. Along with his friend Don Andrews, then the Athletic Trainer for the Fort Worth Texans Hockey Team, Evans realized that rodeo cowboys usually took a bigger beating in 8 seconds than any NBA or NFL player. With the support of Garrison and world champion bull rider Don Gay, Evans and Andrews convinced the Professional Rodeo Cowboys Association to initiate an onsite medical team. The Justin Boots Sports Medicine program was inaugurated at the 1980 National Finals Rodeo and remains the premier provider of top-tier medical support at major rodeos throughout the U.S. By the time Evans retired in 2000 the Sports Medicine team had racked up an incredible contribution toward caring for rodeo cowboys.  They attended 3,300 rodeos and 13,000 rodeo performances, treated over 135,000 athletic injuries, traveled 2.7 million miles and managed to have hundreds of doctors donate $28,000,000 of free medical services to the cowboys.

Dr. Evans’ many accomplishments and awards include being inducted into the Texas Cowboy Hall of Fame in 2002 and the ProRodeo Hall of Fame in 2004. He was also instrumental in the creation of the Justin Cowboy Crisis Fund in 1988. In 2006 he established the J. Pat Evans Foundation for rodeo research. He received the Jim Shoulders Lifetime Achievement Award in 2018 from the Professional Bull Riders Association.

Evans credited his faith in Jesus Christ for his surgical abilities. He was grateful and humbled to be able to treat and extend the careers of so many athletes.  He gained the trust of his patients because he understood firsthand the frustration of being sidelined from competition. He loved his work and proclaimed that ‘cowboys are the toughest guys on the planet!’ The Sports Medicine Program was a dream of his and the world is a better place thanks to his determination, devotion and love of the athletes.

Early in his career Evans met an unsuspecting young woman, Joanie, whom he courted and eventually tricked into marrying him.  Little did she know what a life he had in store for her! Early on, Pat, the ever-attentive boyfriend, agreed to take Joanie to the country to shoot a shotgun for the first time. Pat carefully positioned a rather naïve Joanie in a cleverly chosen spot.  He carefully explained she should lean back a little and then pull the trigger. As expected, the the kick from this 12 gauge shotgun knocked the 97 pound Joanie backwards directly into the mud puddle located right behind her.  Pat and his accomplice, Bob Chambless, told and retold this story for the rest of their lives (but only when Joanie wasn’t around).  Despite this dreadful behavior Joanie agreed to marry Pat and they tied the knot in 1957.  Joanie was the love of Pat’s life and together they raised three high-spirited (putting it mildly) children; a daughter, Kerrie, and two sons, Mike and Kirk.

An avid outdoorsman, Evans taught his children the love of nature, hunting and fishing. The family often spent summers ‘Up Top’ at the family property in a somewhat remote area in Colorado. Most of the family’s weekends were spent at their Texas ranch not far from Dallas shooting, fishing, playing practical jokes on each other and creating a lot of chaos at all times.

Dr. J. Pat Evans’ tireless efforts to help others was endless.  His kindness and humor is the thing legends are made of. He is a Hero. We rejoice knowing he is Home at last with Joanie, his parents and friends that left this temporary home before him.