This story comes courtesy of Ted Harbin and twisTEDRodeo.com

The season 24 premier of the CBS-TV reality series “The Amazing Race” was aptly titled, “Back in the Saddle.”

Ranch-raised brothers Jet and Cord McCoy battled the opening episode of the 12-week series in a comfortable place in the race around the world for the $1 million first-place prize. When they arrived at the finish line of the first leg, they were greeted by host Phil Keoghan near the Guangzhou (China) Opera House.

“Cowboys, you’re back for the third time, and it’s starting well,” Keoghan told the McCoys. “You’re team No. 1.” 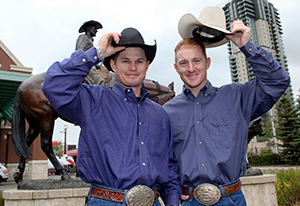 Jet, left, and Cord McCoy have found a lot of fame on the CBS-TV reality series “The Amazing Race,” including their term a few years ago as grand marshals to the Calgary Stampede Parade a few years ago. The brothers are on the race for a third time, and during the Season 24 premier, won the opening leg of the race for $1 million.

Season 24 is dubbed the series’ All-Star Edition and features the fan favorites that have been part of the program over the last dozen years. The McCoys were joined at the starting line in Las Angeles by 10 other teams. They ended the opening leg of the race atop the leaderboard and set a strong tone for the remaining weeks of the show. Their victory also earned the McCoys an Express Pass, which will enable them to skip a single task in order to advance through the race more rapidly.

They also received a second Express Pass that they must pass along to another team before the end of the fifth leg.

“We’re running our own race,” Cord said. “We have two Express Passes for doing our own thing.”

But his brother was a little more cautious.

“It’s a good thing we have the Express Pass,” Jet said, “but I’d just as soon not give the other one away.”

The series started with a bit of a twist. One team, William “Bopper” Minton and Mark Jackson, suffered a loss when Minton was found to be too ill to compete. He was replaced by Mallory Ervin, who had competed in Season 16 with her father, Gary. Mallory Ervin and Jackson were left to learning about themselves while racing around the world.

While standing at a football/track stadium with the UCLA marching band in the background, the teams were instructed to find the symbols of Guangzhou on the hats of band members.

The task got a little more challenging while the band began to march in patterns, but the McCoys were second to the podium, just behind the Afghanamals, Leo Temory and Jamal Zadran. The first few teams earned the right to board the first plane from LA to China. Once there, the teams had to find their way to the Guangzhou’s Street of Wedding Dresses, which has the largest collection of wedding gowns in south China, and were to find one of three stores for the next clue. While the other teams took cabs, The Cowboys found the metro station.

“This is going to work out really good or really bad,” Cord said. “I definitely hope this is the express train to the Express Pass.”

How prophetic. Once on the metro, the McCoys burst into first place and never relinquished. They found the clues at the dress shops first, then traveled to the 1,968-foot Canton Tower, home of the world’s highest Ferris wheel.

“If you’re going to go off on the race by yourself, you’ve got to have a little bit of confidence,” Cord said. “We can just run our own race and not worry about what everybody else is doing.”

It was in the bubbles/cars that the next clues were to be found, though the brothers quickly learned that not all the Ferris wheel had clues. In fact, in their first location, Cord and Jet found the words, “Try Again.” They had to wait a long time for the Ferris wheel to make its way around.

“Every direction is nothing but city,” Jet said as the tandem made their way around the slow circle. “I’ve never seen anything like that.”

The brothers were raised on ranchland outside the tiny southeastern Oklahoma town of Tupelo, which has a population of 331. Guangzhou has a population of about 14 million. The slow ride atop the Canton Tower afforded The Cowboys a way to step way outside their comfort zone, but it wouldn’t be their last time on this season’s race.

Once they made the round, the McCoys boarded another car and found the next clue, which took them to Haixinsha Stadium, host of the opening and closing ceremonies of the 2010 Asian Games. One member from each team had to go up 300 feet to the top of the stadium tower, then be suspended in the air by two wires extended from the hips, then do five back flips.

“That’s all you,” Jet told Cord, his younger brother by 13 months.

“You talk about close your eyes and flip,” Cord said as they ran to the staging area.

When Cord exited the staging area for the tower, he was wearing a red and yellow jumpsuit with fringes while also donning a special harness underneath the jumpsuit.

“I like it,” Jet said, jabbing his baby brother. “Those were your colors … the yellow and the red with the flames.”

As Cord ascended the tower via an elevator, he told his Chinese aids, “At least I’ll have time to say a long prayer on the way down.”

Obviously, the ride up was a tad bit uncomfortable for Cord, a rodeo champion like Jet and most others in his family.

“I don’t like walking around on the top of towers or anything like that, but both Jet and I have been put out of our comfort zones in the race, and we almost expect that,” Cord said. “So even though you’re 300 feet in the air with two little bitty wires and a sweet suit I got, you’ve just got to do it. There’s not an option B.”

As the wires were being attached to the harness, Jet yells, “Holy cow. Hang on, little bother.”

The newly married couple of Brendon Villegas and Rachel Reilly finished second, followed by the father-son tandem of Dave and Connor O’Leary. The Twinnies, Natalie and Nadiya Anderson, finished last and were eliminated.

The second leg of “The Amazing Race” will begin with The Cowboys holding a substantial lead. Can they hold on to it, or will it slip out of their hands through the challenges that come with a race boasting of a million-dollar prize for the winner.