June has been a great month so far and I know it is only going to get better! After stops in Grande Prairie and Leduc, I was off to Brooks for the 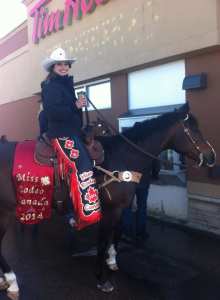 Kinsmen Pro Rodeo. I spent June 6 & 7 in Southern Alberta taking in two rodeo performances, slack, a parade and the Little Britches Rodeo. During the Brooks Rodeo, I was accompanied by Miss Rodeo Airdrie, Pincher Creek, Hanna, Grande Prairie, Medicine Hat and Taber! We braved the cold and rain at the parade Saturday morning. We also made a quick stop along the parade route for coffees at Tim Horton’s – they were quite shocked to see a few horses at the drive-thru window! We were blessed after the parade finished as the clouds moved on and the sun started shining! That afternoon we attended the Little Britches Rodeo. We helped out with the many events they held for the kids including a calf scramble, mutton busting, barrel racing and a greased pig competition. Once the rodeo was over, the visiting royalty participated in an ad-hoc greased pig competition. I’m proud to say after a fast, wild chase I manage to capture a pig! 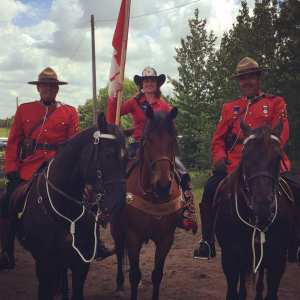 The weekend after Brooks, I attended the 54th Annual Daines Ranch Pro Rodeo in Innisfail. It was no surprise that the skies opened up and it rained before the first performance on the Friday night which made it a muddy crowd pleaser! I attended all four performances. I took part in the Innisfail Rotary Rodeo Parade Saturday morning and had the honour of carrying the Canadian Flag behind our RCMP during both grand entries. Although we had rain the Friday night, the other performances were filled with sunshine! I would like to thank Jack Daines and the Daines family for inviting me to their wonderful rodeo! 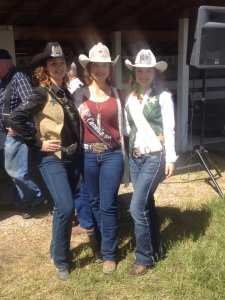 I also enjoyed the Sundre Pro Rodeo from June 20-22nd. I arrived Friday afternoon and spent the day with the 2014 Sundre Rodeo Royalty contestants before they announced their new Miss Rodeo Sundre Queen that evening. Congratulations to the new 2014 Miss Rodeo Sundre, Desirae Jackson, and Sundre Rodeo Princess, Jessica Craig. It was wonderful spending time with all these wonderful young ladies. We attended an ATB Financial BBQ and visited with the residents at the Sundre Seniors Home. We also attended the pancake breakfast and parade on Saturday morning and had a great time (and sunshine) for all the performances!

June is flying by! I will be attending the Ponoka Stampede until the beginning of July. The next couple of weeks also include the Airdrie Pro Rodeo, Calgary Stampede and Teepee Creek Stampede.