When it comes to Cowboy music Alberta has a champion in the multi talented Allen Christie.  A Native son of Caroline, Alberta Christi won himself a following among rodeo cowboys when he penned the catchy but accurate tune ‘Old Bronc Saddle.’  Captured in the songs’ lyrics is a nod to the legendary Harvey Northcott, as well as the stock of the Calgary Stampede wrapped in the basic construction of the Bronc saddle, which Christie referred to as a “rawhide lazy boy.”

Christie grew up around cowboys in the Innisfail, Caroline, Rocky country and comes from a family immersed in the western life.  His older brother, Bruce Christie was CFR qualifier in the calf roping, and his late brother Kevin, a gifted horse trainer.  His sister, Jody Laitre is a saddle maker.  Allen, however, took to music like a duck takes to water.  “I first picked up the guitar when I was six.  My family was musical and I remember hearing the banjo licks to the Beverly Hillbilly theme song and thinking I want to do that.”

Today, Christie is a multi instrumentalist who shines on guitar and banjo and plays most anything with strings.

In the past 20 years Christie has seen his music evolve from the lively energies of a youngster playing 6 nights a week in a bar to a respected songwriter and musician performing his own material almost exclusively.

Christie is passionate in an understated way about original Cowboy music.  “In Canada we have no real way of saying this is Western music unlike Texas or the United States where roots music and western swing have a large following and a label.”  “But it’s out there and in a way that is really important,” says Allen.

Not one to worry about the momentum of his ‘career,’ Christie says, “I’m all about taking the business side of things out of the art of music.” 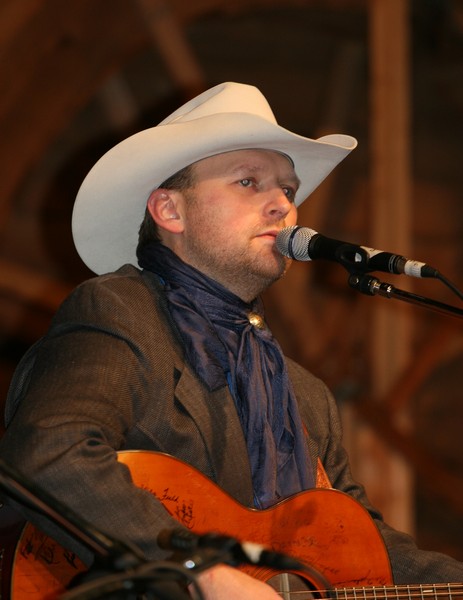 To that end Christie has lent his talents in the recording end of things to help record several rodeo cowboys music for posterity’s sake.

Climb into any young rough stock riders vehicle and you are likely to find a CD of Mel Brown’s songs from his album, “1977” produced by Christie. Allen enjoys the creative process but gets most excited about the finished product. Presently Allen is making a new record for world champion saddle Bronc Rider, Mel Hyland. The compilation will revisit a few of Mel’s classics and introduce a whole new generation to the music I grew up hearing around rodeo campfires.

Listening to The Brand on my way home from lunch with Allen in Caroline, I am convinced this artist has come full circle.  His songwriting and arranging on this album embraces the best of several genres from western swing, cowboy traditional to country blues/rock.

Christie is optimistic about the future of music in the Internet age.  “Even if you aren’t great using a computer, the internet is giving music lovers a chance to get great music into their hands without the censorship involved in records and big business.

“There are always people who would look at the Mona Lisa and say, my wouldn’t that pop if it were pink!  Nobody needs to tell cowboys what to sing about or how to play it,” says Christie.

Lynda Thurston is a singer/songwriter from and the driving force behind Genuine Cowgirls band.  Lynda also ranches with her husband Skeeter Thurston at Big Valley AB.