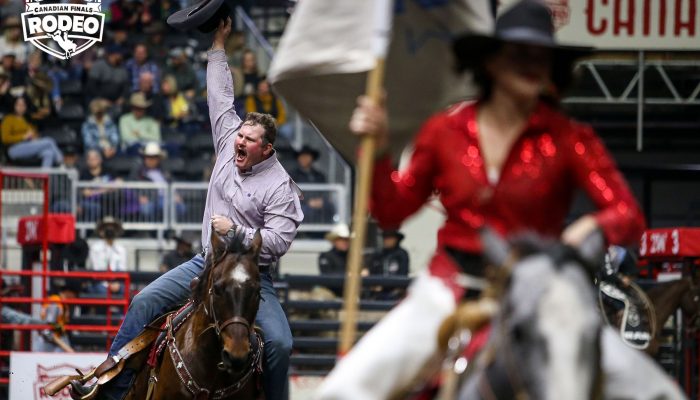 “That was an electric little horse,” Vold commented. “I kind of messed him up a couple of times. I was kind of disappointed in myself… but I guess they didn’t see what I felt.” Vold went on to say, “I saw the go-round buckles last night and thought they were pretty cool. I decided I’d better hump up and try to win one.”

When combined with a fourth place finish in the first performance, Vold moved to the lead in the overall standings with 16,954 points, a 1000 point cushion over second place man, Clint Laye.

After a tough first night at CFR47, Thorsby, AB tie down roper Erik Dublanko rebounded with an 8.1 second run to best the competition on the second night.

“Luck plays a lot in everything, and I got lucky. I put one (wrap) on and it worked out.”

That one wrap, rather than the traditional two, enabled the eight time CFR qualifier to slip by Riley Warren, Clayton Smith and Logan Bird who all posted 8.2 second runs. Dublanko now sits second overall, 1700 points back of Bird.

The Saskatchewan team roping duo of Brady Chappel and Tee McLeod made it back to back wins with a 4.1 in round two to go with an earlier 4.3. The wins have moved the pair to a commanding lead atop the standings with 25,185 total points.

Other round winners included Lisa Zachoda in the ladies barrel racing with the fastest time of the rodeo to date (14.163); Sam Kelts in the saddle bronc riding who rode Calgary Stampede’s Z-37 Zoaria Hills to an 86 point result. Kelts jumped to second place overall – less than 12,000 points behind Zeke Thurston. In the steer wrestling, Ty Miller of Wainwright, AB turned in a handy 3.8 second run to capture top honours and move to third overall behind Cody Cassidy and Season Leader, Stephen Culling. Nick Tetz of Calgary looks to have overcome the injuries that plagued his 2021 season as he marked 86.75 on Outlaw Buckers’ -52 Positively Banging to take the lead in the bull riding.