Ponoka, AB: Canadian Bucking Bulls Inc., The (CBBI) was started with the vision of helping guide the bucking bull industry in Canada to a new level. In just five years they have moved toward doing exactly that.

“We started Canadian Bucking Bulls Inc. to be able to provide the opportunity to others to raise rank bucking bulls with some of Canada’s best bloodlines.” Told Tanner Girletz over the phone. Your opportunity to get a chance at some of those bloodlines will be at the Fifth Annual Custom Made Production Sale which takes place Monday, June 24th at VJV Auctions in Ponoka, AB.

The preview starts at 11:00am with lunch to be served at noon. Cattle will begin selling at 1:00pm. The sale is also available for bidding online at VJVaucion.com

According to Girletz, lot number one of 42 total is going to be one of the best lots in the sale. It’s half interest in a Wolf Can Do Bull Calf out of an Up In Smoke Cow.

“There’s a little bit of everything in here.” Girletz adds. “A hand full of animals go back to Tejana’s Back father to Tahonta, Bull of the World along with Lorne High’s 007, Paige Breeding, Skat Kat, Houdini, Funky Chicken and a lot of Bucking Bulls of Canada.”

Also included in the sale are two bulls that you could put on the truck and could go tomorrow. They come from Two Bit Bucking Bulls and could go as buckers or breeding bulls.

“If you don’t want to buy a cow there’s 20 straws of semen in the sale anywhere from Major Payne, Skat Kat, Unabomber, Voodoo Child and I’m a Gangster.” Girletz told. “Another thing, Lot 31 are Ty Elliot’s Bucking Chutes from Western Connections Portable Welding for bucking calves. He’s Putting one of each delivery in there.”

In 2013, the first ever CBBI Futurity Series has been introduced including three events. Those are the already completed Friend Futurity from May 15th. Another in Cereal, AB on July 9th and the final one in Stavely, AB on August 3oth.

Between the three, the bull that has competed at all the events will win a $1,000 credit towards the 2014 CBBI Production Sale.

Second place will earn a $500 credit. Two bulls, lots eight and nine have already qualified for the bonus and were both in top 15 at the Friend Futurity.

For more information on the CBBI, visit CBBI.ca

June 24th is going to be one busy day in Ponoka, AB. After the sale you’ll want to head on over to the Ponoka Stampede grounds for the kickoff of this year’s Stampede!

At 6:30pm the 11th Annual Jace Harty Memorial Bull Riding presented by the Ponoka Stampede takes place featuring the likes of PBR World Champions Kody Lostroh and Mike Lee along with top Canadians Ty Pozzobon and Aaron Roy. They compete at what is now Canada’s Biggest Bull Riding for a total added prize money of $40,000.

Stay tuned next week for a full “What’s That Bull” story talking about more of the math-ups you’ll see on the evening of the 24th. 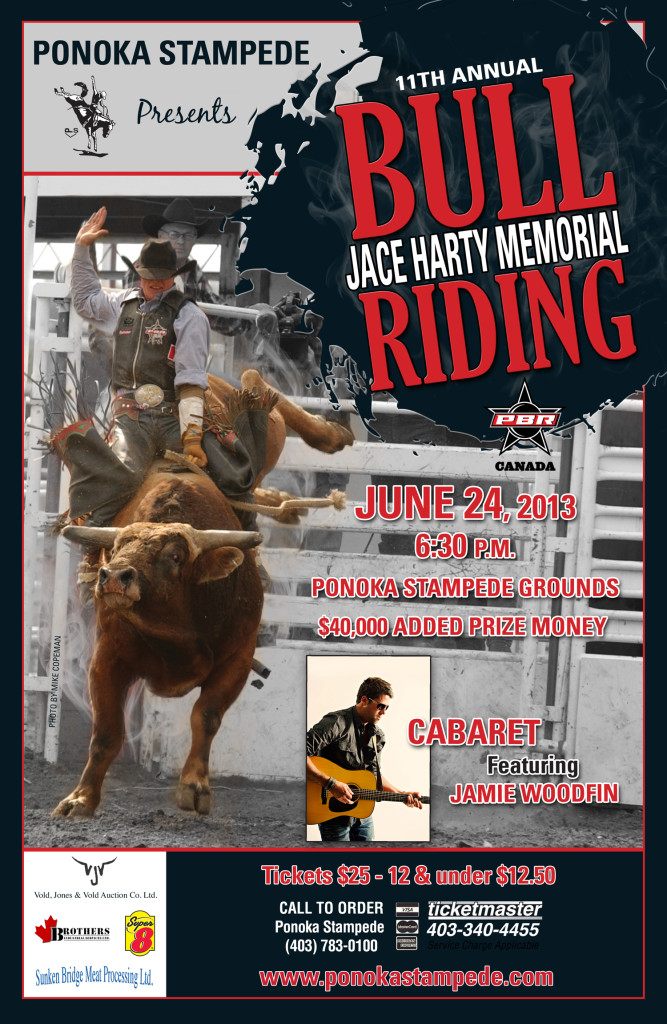