Amber Marshall, who plays “Amy” on the Hit Show Heartland will be appearing with
four-legged co-stars at upcoming Charity Event
What started out as a small fundraising effort has turned into a big community event for a local couple. In January, Jessie & Billie Heggie from Raymond, AB were brainstorming ideas to raise funds to build a house for Orphans in Zambia, Africa. Jessie, a Professional Cowboy, saw an opportunity to host a Team Roping & Steer Wrestling Event to raise money. His wife, Billie saw an opportunity to involve the community by collecting silent auction items, opening a concession and by asking her good friend and World Renowned Performer, Niki Flundra to come and entertain the audience with her trick riding and liberty horses. Since the word got out about their event, the community response has been overwhelming in so many ways!

The most exciting addition to the day’s agenda is that Amber Marshall – recently voted “Canada’s Favorite Screen Star” – will be in attendance at the event, along with some of her four-legged friends from the show. Amber has won the hearts of Heartland fans in her role as the horse-whispering heroine Amy Fleming for six seasons. Amber will be included in one of Niki Flundra’s “Unbridled” Liberty Horsemanship Acts, with none other than her equine co-star “Spartan” from recent Heartland Episodes. Following their performance, Amber and Niki will be doing a full autograph session for the public.

In addition to these performances, the public will have the opportunity to see some of the country’s best talent in the rodeo events of Steer Wrestling and Team Roping. With trophy saddles, buckles and more up for grabs, this event will be sure to draw top talent. A Brand New 14’ Aluminum Stock Trailer – provided by Lethbridge Dealer Vantage Trailer Sales – will also be auctioned off to the highest bidder. There is a silent auction, Lil’ Buckaroo Rodeo and full concession as well. No matter what background you come from, this event is sure to be a crowd pleaser and a great way to spend your Saturday! Events will start at 11 am, Saturday April 6 at the Magrath Ag Society Building in Magrath, AB.

The inspiration for the event is the building of a house called “Kingdom House” on the Tree of Life Children’s Village in Zambia, Africa. Billie is very involved with the organization – Family Legacy Missions International – who builds the houses and cares for the Orphans who come to live in them. The funds raised during the “Cowboys for Kingdom House” event on April 6, 2013 will directly go to the $100,000 goal in building this house, which will be home to 12 Zambian Orphans and will stand to bring impact for generations to come.

To schedule an interview with Billie Heggie, please contact her at information provided above. You can also find more information on Facebook at “Cowboys for Kingdom House” or visit the website atwww.buildingkingdomhouse.com. 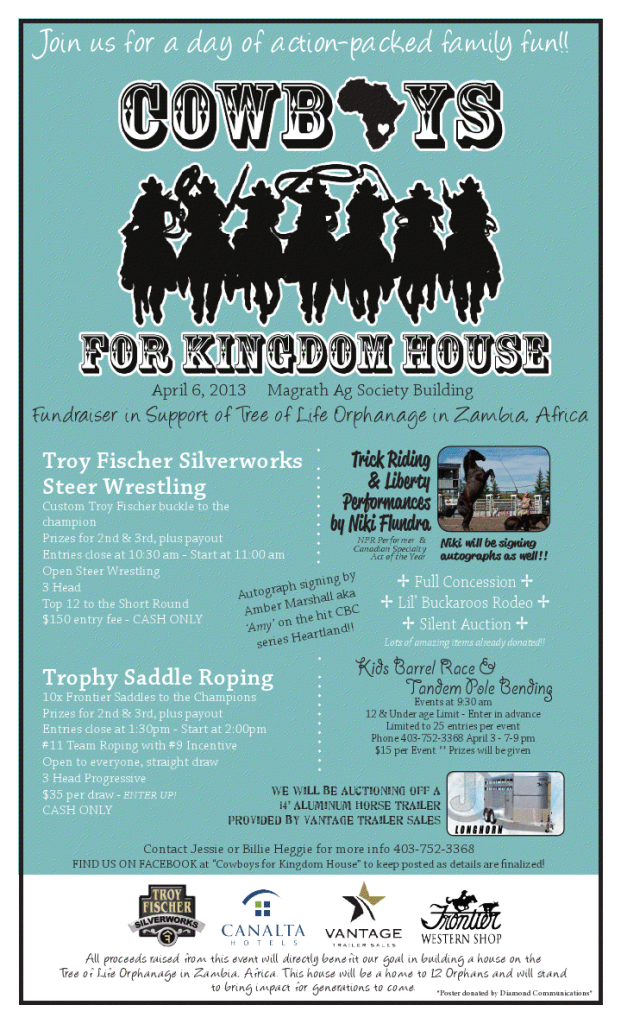