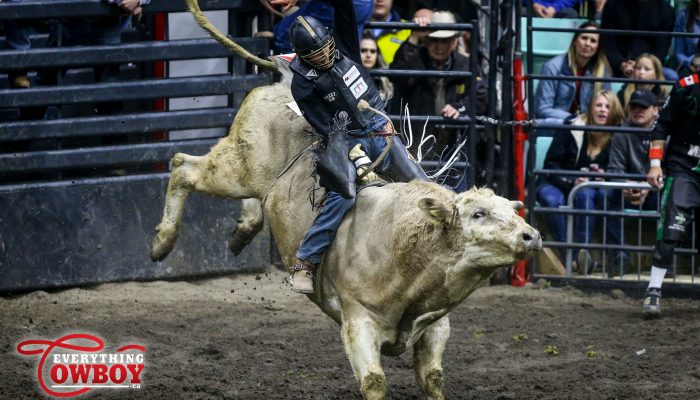 The six Canadian bull riders who have qualified for the 2019 Calgary Stampede are undoubtedly the best in the country. JW Hart was quoted as saying the Calgary Stampede is the best rodeo event going because it is the hardest rodeo to qualify for, and reigning champion Wacey Finkbeiner agrees.

“The guys going are damn sure some of the best this country has going,” Finkbeiner said. “It would be good to keep that $100,000 in the bull riding in Canada.”

While he is a Stampede rookie, Finkbeiner is the reigning Canadian Champion Bull Rider and a leader amongst the Canucks in 2019.

Joining Finkbeiner will be Jordan Hansen, who recently relocated to Ponoka Alberta, but is a long time Calgary region resident. Hansen is the 2016 Canadian Champion Bull Rider, as well as the most recent Canadian to work his way into the Wrangler National Finals Rodeo in Vegas, making the cut in 2017.

“His last couple years have been pretty injury plagued. He has already had to take a month off this year, but we have all seen what he can do when he is healthy and he is healthy right now, Finkbeiner said. “He has been kicking everybody’s butt, I see big things coming for Jordy not only in the CPRA and PRCA but in the PBR as well.”

Another Calgary Stampede rookie will be Garrett Green. The Meeting Creek Alberta native is a many time CFR qualifier and one of the most accomplished riders in Canada. He is consistently the best bull rider each and every spring, starting the last four season off with multiple event wins in both CPRA and PBR competition, and can never be counted out when it comes to the Canadian Finals Rodeo come November.

“He has won more money than anyone so far this season and has the highest riding percentage. He’s always been one of the best in Canada but he seems to always have a good spring and good fall and has his troubles in the middle of the year. This year I think will be different,” Finkbeiner said. “He’s put more work in than in past years outside the arena and I know that will pay off for him come July.”

Two-time PBR Canada Champ Zane Lambert will be back at the Calgary Stampede this summer. When it comes to bull riding in Canada, be it the rodeo side or the PBR side, Zane Lambert is at every finals, and is always a contender for event wins and national titles.

“It’s pretty hard to bet against Zane. He is one of those old school guys who when the money and pressure and rank bulls are all at the same event, he shines pretty bright,” Finkbeiner said.

As professional rodeo and bull riding announcer Brett Gardiner calls him, “The Cowboy” Jared Parsonage will be making his Stampede return this July. The Saskatchewan native got his first taste of the PBR Unleash the Beast tour last season, and with event wins piling up in 2019, it is expected that Parsonage will be in Las Vegas at the PBR World Finals in 2019 if he can stay healthy.

“I can’t remember the last time he has had a full injury free year,” said Finkbeiner.  “He always seems to get hurt at the worst time a guy can get hurt, in the middle of June. I expect him to make a run at the PBR World Finals and the CFR and is damn sure one of the top dogs in Canada.”

And last but certainly not least is Brock Radford, who will be making his return to the sport likely just shortly before the Calgary Stampede from a knee injury. Radford has been a contender for a PBR Canada title for the past two seasons, despite riding with injuries last season. He got his first taste at the PBR World Finals last season as is one of the most driven bull riders Canada has to offer.

“Brock will be damn sure hungry coming off a knee surgery, and I know he is putting in a lot of work to rehab it properly, spending a lot of time at Prairie Therapy with Brandon Thome,” Finkbeiner says. “He has always been a hungry, gritty rider and once he gets back going I don’t see him slowing down.”