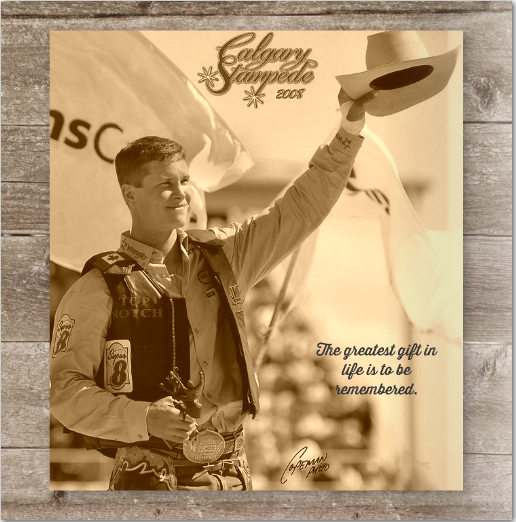 There’s nothing like retiring on top. Tyler Thomson chose to end his career at the end of his 2015 campaign at the Canadian Finals Rodeo in Edmonton.

In Edmonton, Thomson nearly finished at the top winning another Canadian Championship, coming up short by about $1,000. He did win the CFR aggregate title though meaning he did win his last rodeo.

Technically that might not be on top, but for Tyler, he’s as much a champion outside the arena. Personally I have to thank Tyler for standing up for me and what I do here on a certain occasion.

Thomson may not ride bulls again but he’s a cowboy every day of the year. Look for him inside the arena still as a pick up man in the near future. You’ll also see a few bulls he’s raised out there, like Sheep Creek who this year became the first bull in over a decade to earn the triple crown.

Tyler’s wife, Sheena, put together a book with pictures and quote from a number of the people Tyler travelled with and competed against throughout his career. Check it out HERE or by clicking or tapping on the picture below.

As the picture says, “The greatest gift in life is to be remembered,” Tyler Thomson won’t only be remembered as a world class bull rider but great friend and great person inside and out of the arena.

Here’s to all the best in your retirement Tyler. We will surely see you down the road!