Brooks, AB: This is the draw for the EPB Canadian Finals in Brooks this coming Saturday. On another note, Tanner Byrne won the Long Go at the PBR Touring Pro Event in Pueblo, CO tonight too. Looking for the video..

Ty Pozzobon got himself on the board in Winston-Salem, NC with an 85.5 to sit 6th at the PBR’s BFTS stop there this weekend.

**As an addition from yesterday, Ty Pozzobon finished the event in Winston-Salem with his 85.5 points and takes himself home a check for $1,000 this weekend. Aaron Roy goes home with his $400 appearance check.

Tanner Byrne told over a text message today that he got just under $3,000 for his long go win in Pueblo.

Stay tuned this week as I write my first “What’s That Bull” Article of 2013 for the EPB Canadian Finals. 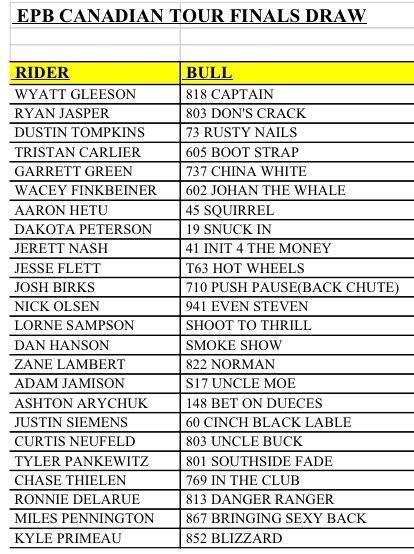