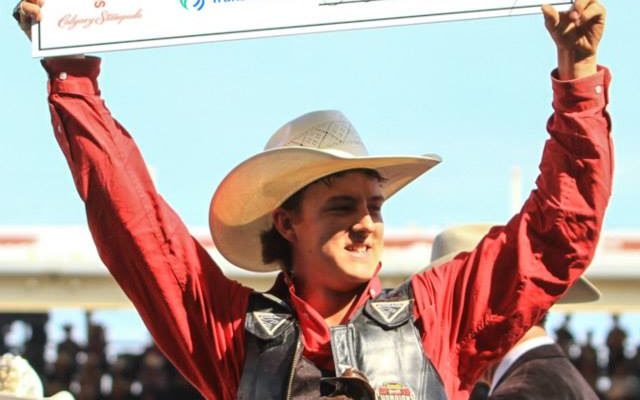 CALGARY, Alberta – The first flight of finalists for Showdown Sunday at the Calgary Stampede has been set. The bull riding line-up includes Chase Outlaw, who nodded his head for Rhythm & Blues on Monday. The two made powerful music together, to the tune of 90 points for the go-round win, pushing his Calgary earnings to $13,500.

“Everybody was telling me how I had the pick of the pen today, and I did my job and it worked out,” Outlaw downplayed in his southern drawl. But there’s no minimizing the feat it is every time the Arkansas cowboy climbs back into the chute, less than a year after a horrifying bull riding wreck. In Cheyenne a bull hit him in the face, and shattered it.

“They had to put 68 screws and 12 plates in my face, in thirteen hours of surgery that night,” he shares, matter-of-factly. “I sat out two and a half months, came back, made the World Finals, had another surgery in November and then was back at the first of the year in January.” Also advancing from Pool A for the bull riding is Jess Lockwood, with $14,000; Jared Parsonage $10,750; and Zane Lambert with $8500.

What a day of barrel racing! In fact, the previous fastest time of the week was only good enough for fifth place Monday. Ivy Conrado blew the doors off the place when she rounded the turns in just 17.01 seconds, which is only two one-hundredths of a second off the arena record of 16.99, set in 2017. Conrado was emotional about her fastest run ever at the Calgary Stampede.

“I can’t believe it, I’m like flabbergasted, to be honest,” she bubbled, moments after the speedy run, which looked effortless for her horse. “J-Lo never looks that fast. She just tries really hard. She’s not the most physical horse, she’s not the “fastest” horse, or anything like that, but she tries really hard and she does the same thing every time.” For the third time, Conrado will be part of Showdown Sunday at the Stampede, after finishing as the highest money winner among Pool A barrel racers at $17,500. Nellie Miller was close behind ($17,000). Jessica Routier and Jessie Telford fill the remaining spots with $8000 each.

“I’d rather skip that one,” he said about Wildcard Saturday. “I’ve ridden in that one a few times. It’s a tough one to get through. There’s twelve guys and twelve tough buckers in the Wild Card. I’d rather just go straight to the semi-finals.” Also getting a break from Saturday’s action from Pool A are Jake Vold ($11,000); Taylor Broussard ($10,500); Hardwick ($10,000) and Richmond Champion ($9500).

The man who got to make the victory lap in a Saddle Bronc round full of high marks was Zeke Thurston. He got the half point edge, with an 88.5 on Rock Star, making his weekly income $18,500, highest of all events in Pool A.

Legendary looper Trevor Brazile added to his collection of small Stampede bronzes with his first tie-down roping money of the week. He showed the style that’s won him 24 world titles with a 7.3 second run.

“I’m just glad for every opportunity, going to a few (rodeos) or not, when one of them’s Calgary, I’m going to come. I love the rodeo. I’ve never won it, but it’s still one of my favorites. That says a lot about the Calgary Stampede.” Brazile will need to be back for Wild Card Saturday to try for a Sunday berth. Those who avoid that extra round are a pair of Albertans and a pair of Texans: Caleb Smidt ($16,000); Logan Bird ($13,500); Jake Pratt($11,500) and Riley Warren ($7500).

Pool B contestants begin their Calgary Stampede journey on Tuesday.