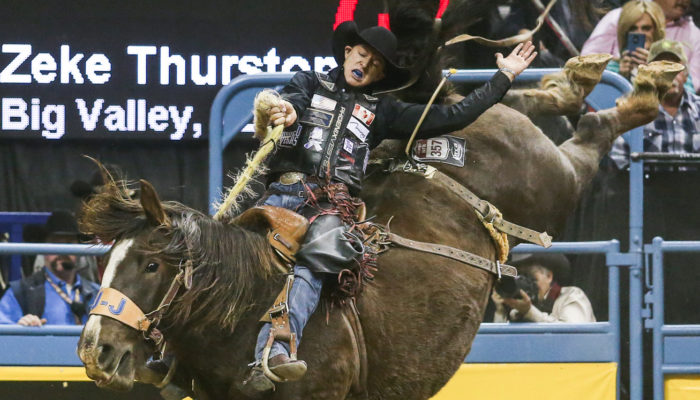 Thurston rides to pay window in Round 3

LAS VEGAS, Nevada — Zeke Thurston got the monkey off his back in Round 3 of the Wrangler National Finals Rodeo on Saturday night at the Thomas & Mack Centre.

Thurston, of Big Valley, AB hadn’t placed in the first two rounds, narrowly missing by .08 seconds on Friday. On Saturday, the two-time NFR qualifier rode Julia from the J Bar J firm for 85 points and a check worth $18,192 for a split of second.

Coming into the finals fourth in the world, Thurston was passed by the impressive Ryder Wright of Utah, who’s won all three rounds so far. To this point the Alberta man is almost within two round wins of the gold buckle but currently ninth in the aggregate with two scores so far.

Fellow bronc riders Jake Watson of Hudson’s Hope, BC and Clay Elliott of Nanton, AB put up scores of 81 and 79 respectively but were left without checks.

Jake Vold of Ponoka was the only other Canadian to cash a check in Round 3 from Vegas. Vold was 83.5 points on a Big Stone Rodeo horse called Spilled Perfume for a split of fourth worth $8,885. Orin Larsen scored 79.5 points on Tripwire from Corey & Lange but was left out of the money for the third-straight night.

Tanner Aus of Minnesota picked up the go round buckle on C5 Rodeo’s Virgil splitting first with Clayton Biglow for $23,481 each after matching 88 point efforts.

Levi Simpson of Ponoka and Jeremy Buhler of Arrowwood were two spots out of the money on Saturday with a nine flat. Kolton Schmidt and Shay Carroll had a no time. Schmidt, Larsen and Elliott are the lone Canucks yet to win any money on this trip.

In the bull riding, Sage Kimzey rode Night Moves from the Calgary Stampede for 87.5 points for $20,731 and Shane Proctor won the round after a 91 point effort on bull of the year, Midnight Bender.

Go round buckles to date: 5