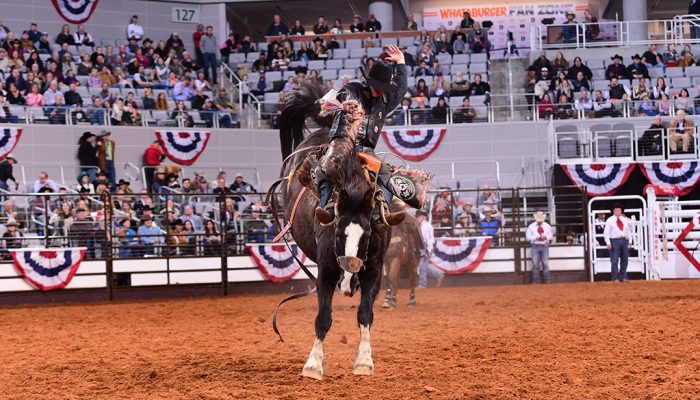 The third time was the charm for Canadian Kolby Wanchuk during the Wild Card Round at the Fort Worth Stock Show & Rodeo’s ProRodeo Tournament February 5. After earning two re-rides, he scored 86 points on Pickett Pro Rodeo’s horse Just Bugs to win the saddle bronc riding and qualify for the semi-finals.

FORT WORTH, Texas (Feb. 5, 2020) – The Wild Card Round at the Fort Worth Stock Show & Rodeo (FWSSR) was filled with drama, excitement and some disappointment for this year’s contestants.

It was a last-ditch opportunity to advance to the Semi-Finals (Feb. 5-6) and earn an opportunity to compete at Saturday night’s championship round of the all new FWSSR ProRodeo Tournament.

It was a heartbreak for Stephenville’s J.J. Hampton who has roped all her life and is the most decorated breakaway roper in the event’s history. Hampton was the first roper out and failed to connect. Her time at this year’s stock show is done but competing here has been a dream come true and she is looking forward to next year.

Jennifer Casey, a physical therapist from Mesa, Washington won the round with a time of 2.1 seconds.

Kolby Wanchuk of Sherwood Park, Alberta, had to work three times as hard as the other saddle bronc riders on Wednesday night to get a chance to ride in the Dickies Arena at least one more time.

The first bucking horse Wanchuk got on failed to perform as expected, so judges gave him the option of getting on another one. He quickly agreed as he had to be among the top two tonight to have a chance. Then the second horse he got on stumbled after leaving the chute, so he again took the option.

Then Wanchuk’s third horse in a matter of minutes, Pickett Pro Rodeo’s Just Bugs, had an outstanding trip that resulted in an 85.5-point ride for Wanchuk. That was good for second place behind Milford, Utah’s Spencer Wright. They will both be competing in the Semi-Finals.

The first team ropers to compete on Wednesday were also the best of the night. Clay Smith from Broken Bow, Oklahoma and Jade Corkill, of Fallon, Nevada, stopped the clock in 4.3 seconds for the win. Between the two of them, they have earned five world championships. Smith’s gold buckles came in the heading in 2018 and 2019. Corkill got his from 2012 – 2014. They started roping together last year and the partnership is continuing successfully this year.

Six-time world champion bull rider Sage Kimzey will also be among the semi-finalists after a win on Wednesday. He rode Little Big Man from J Bar J Rodeo for 88.5 points.

The first performance of the Semi-Finals will be Thursday night beginning at 7:30 p.m. Eight contestants will be featured in each event with the top four advancing directly to Saturday night’s Championship Finals.

The following are unofficial results from the Wild Card Round of the  FWSSR ProRodeo Tournament at the Fort Worth Stock Show & Rodeo, Wednesday, February 4, 2020.