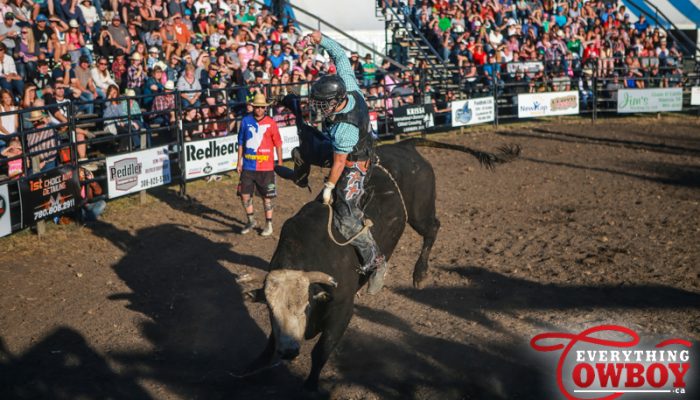 Ted has given me the reins for this round of picks, and I’m hoping to turn my luck around when it comes to picking match-ups this time around. Lucky for me, Cluny boasts a stacked line up of bulls and bull riders so if I play my cards right I should get back on track.

This event features some of Canada’s top riders, as well as a few top guns from south of the 49th parallel. What I am trying to get at here is that if you’re not planing to nurse your Canada Day hangover at the Cluny PBR, you’re crazy! Slim Wilson and crew have put a ton of work in to this deal, and it promises to be a great time.

So without further a due, here are my marquee match-ups for Sunday night. The 1st annual Cluny Lions Charity PBR takes place Sunday, July 2nd at 6:45 pm.

Todd Chotowetz vs. 168 Iggy – Todd is quietly having one of his best seasons on the rodeo trail. I just so happened to be in Airdrie on Wednesday night and watched Todd make a huge ride on a real tough bull. Safe to say Todd has everything clicking at the right time. I think he will continue the trend here. He matched up with a young bull from the Wilson firm by the name of Iggy. I asked Slim about this dude, and he told me should be out and around to left. That’s away from Todd’s hand which adds some degree of difficulty, but I don’t think he will have any trouble. Look for Hawt Toddy in the championship round.

Brock Radford vs. 018 Nugget – Brock is probably the hottest guy in Canada right now. He’s been riding everything they’ve run under him, and making a statement along the way. They won a round at the Ranchman’s Bull Bustin’ a few years back on this bull, and I think Brock could do the same here. Brock is firing on all cylinders heading into Cowboy Christmas, and all I have to say is, watch out.

Tanner Byrne vs. 330 Mama’s Broken Heart – 2017 hasn’t been easy on my old buddy Tanner, but one thing I do know is that he’ll never let it keep him down. Tanner knows what it takes to win, and there are not many guys who work at this game as much as he does. I’ll be honest here, I don’t know anything about this bull but he comes from the Flying High firm so I’m sure he’s a good one. Ill never bet against Tanner either. He’s been one of Canada’s top guys for a long time now, and I believe he will keep things rolling in Cluny on Sunday night.

Matt Triplett vs. 185 Shot of Whiskey – In my conversation with Slim tonight, he mentioned this match-up to me. Slim chose this as his round winner, and I’m gonna have to agree with him here (we don’t agree on much). Matt is one of the top guys in the world for a reason. He is super hard to get on the ground, and tires his guts out every time he ties on to one. Shot of Whiskey comes from Josh and Tammy Berezay and the rest of the 2 Bit crew. He’s a big red souped up spinner, that a lot of guys seem to get along with. I think Matt is going to be added to that list. These two are going to contend for the round win, no doubt about it.

The full Cluny draw can be found HERE.