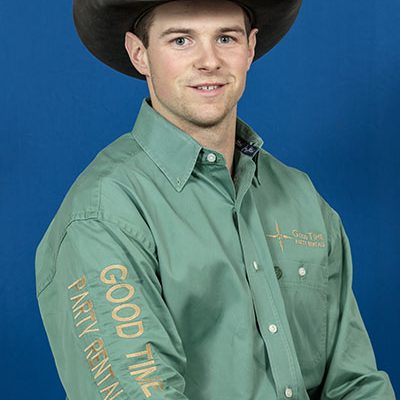 “It opened my eyes when I was one of the three guys who walked into the arena at the start of the last performance at the CFR with a chance to win it,” the 27 year-old Bowden resident admitted. “To be that close made me want to shoot for it even harder this year.”

Marshall’s bid to move closer to the guys at the top of the season leaderboard got a nice boost on the weekend as the two time All-Around Champion posted a pair of wins on an eastern swing.

“I had two really similar horses,” Marshall noted, “Vold Rodeo’s Fallen Timber out in Morris, Manitoba, stop number six on the Finning Pro Tour, and Big Stone’s Gold Dust at Kennedy (Saskatchewan). I’d never been on either of them but they’re both pretty strong and circle to the right pretty much every trip so I knew what to expect. Looking at the draws at both places, I figured with those two horses being really solid, I’d have a good chance.”

The script played out exactly as the central Alberta farmer-rancher envisioned it. He was 81.5 points for $2188 at the Manitoba Stampede, then followed up with an 84 point ride at Kennedy’s Moose Mountain Pro Rodeo for another $1104. The back to back wins propelled Marshall from 7th to 3rd in the Canadian standings.

“I usually have a little more won at this point in the season but there’s still a lot of money out there if a guy can just stay healthy and keep it going.”

The team roping combination of Dawson and Dillon Graham has a different approach to their 2019 season and it seems to be working for the talented pair.

“In the past I think we looked ahead too much and got thinking about the standings and how much money we had to win, stuff like that,” 18 year-old Dillon acknowledged. “This year we’ve been really concentrating on roping one steer at a time and just focusing on that. We hardly look at the standings and we’ve got a really good mental game right now.”

That strategy paid off again for the Wainwright cowboys as they got the win at Morris with a 5.0 second run in the first performance that held up for the $1740 (per man) top cheque, then added a 1/2 spit at Kennedy with a 5.3 second run and another $1021 each. The combined payday will provide a little more comfortable cushion for the duo as they’ll climb at least a few notches from their twelfth place spot in the season standings entering the weekend.

With heeler Dillon on his roan, “Strawberry”, (which he acquired just a couple of days ahead of Drayton valley, then split the win on the six year-old), and 20 year-old header, Dawson, on his palomino, “Outlaw” , it looks like the brothers Graham might be poised to make that first trip to the CFR. “When we were little and roping the dummy, we’d pretend we were at the CFR so this would be a dream come true.”

Another dream was realized this weekend when Arrowwood, Alberta’s Kole Ashbacher recorded the first Canadian win of his pro career. The third generation bronc rider put together an 80 point ride on Big Stone Rodeo’s YaHaWild for $1066, keeping the 23 year-old two time Canadian College Champion very much in the conversation for a CFR berth of his own.

Further west, it was Ardmore bronc rider Lane Cust boosting his season’s earnings with the win at the Saddle Bronc Showdown at Quesnel, British Columbia as he pocketed $2614.48 courtesy of an 87.5 point ride. That result vaults the two time Canadian Novice champ from a distant 28th in the standings into the top fifteen. With at least a couple of CFR spots opened up with injuries to journeymen Clay Elliott and Layton Green, a bevy of young riders including Cust, Ashbacher, Jake Burwash, Jake Brown and Chase Zweifel will provide an interesting dynamic to the final third of the season as they battle hard to be in Red Deer later this year.

Check out rodeocanada.com for complete results.