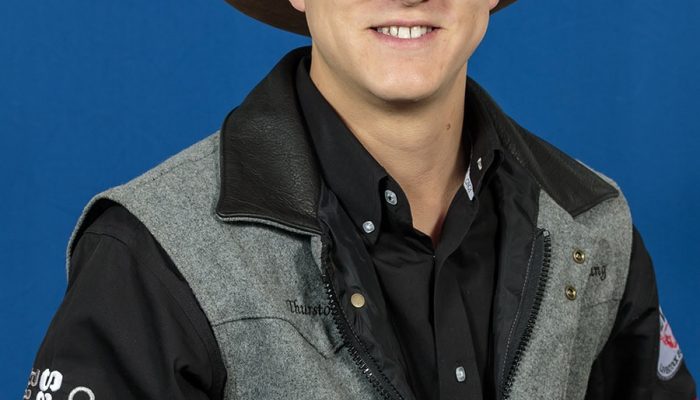 The 2016 World Champion saddle bronc rider rode like a world champion is expected to ride. And when the dust settled and the smoke cleared, Big Valley, Alberta’s Zeke Thurston, had just added another $26,000 to his bank account, and just as importantly to his Canadian and PRCA world standings earnings.

The second generation cowboy rolled into Williams Lake for the Finning Pro Tour stop and matched up with Duffy Rodeo’s CFR selected Appaloosa mare, Rip n Zip for 86.5 points and the win. After adding a small cheque at the Airdrie Pro Rodeo, Thurston saved the high drama for Canada Day at the Ponoka Stampede (also a Finning Pro Tour event). Having already won the long go with 89 points on C5 Rodeo’s Showtime, the 24 year old mastered a pair of Calgary Stampede buckers—Timely Delivery for 88.25 to win the short go and clinch the average, then another 89 point-er on Ancient Delivery in the Showdown for the biggest of his six weekend cheques—a $9750 strike.

Coming off “the best winter I ever had”, Thurston has been firing on all cylinders in recent weeks and the huge start to his Cowboy Christmas vaulted him to first place in the Canadian standings and helped him close ground on the world leader—Ryder Wright.

On a cold, blustery Canada Day evening, Thurston grinned, “It’s only fitting that a rodeo in Canada takes place in sub-zero temperatures.” But despite the coolness, the gifted central Alberta athlete was blazing hot throughout the weekend. Of the Ponoka win, Thurston added, “This is awesome. Ponoka’s not far from home; the family’s all here to support me and it’s a lot of fun.”

Another big mover on the weekend was Mexican born bull rider, Edgar Durazo who picked up the win at Ponoka including a spectacular 90 point effort on Vold Rodeo’s Whisky Hand in the Showdown round. The July I weekend haul ($17,818 at Ponoka and $1059 at Airdrie) took him closer to the goal he stated was his primary focus for 2019—a first trip to the Canadian Finals Rodeo. Durazo will wake up Tuesday and see his name at or near the top of the CPRA standings leaderboard.

* The Manning twins from Edson, Alberta grabbed a share of the spotlight – Taylor for her Williams Lake barrel racing win (16.571 seconds, $4291.10) which will keep her placed near the top of the standings and Tristen for earning the Ponoka Stampede Steer Riding title (80.5 points, $1908.96).

* Mike Beers, 23 time NFR qualifier and 1984 World Champion heeler and his partner, Chad Evenson came away from the weekend over $10,000 richer courtesy of their performance at Ponoka that included the Showdown win (8.3 seconds) for over $7500 each.