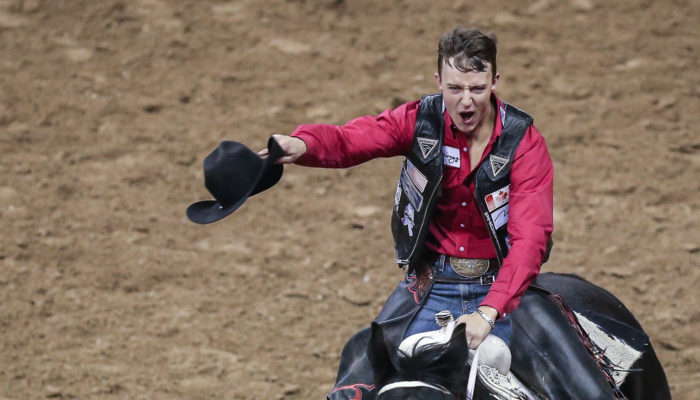 LAS VEGAS, Nevada — In 1986, Skeeter Thurston won or split two rounds at the Wrangler National Finals Rodeo to finish sixth in the world standings. Fast-forward 30 years later and his son, Zeke has won his first round at rodeo’s Super Bowl.

“It’s great, I’m super excited,” Zeke said. “Last year I came with high hopes and it didn’t quite go how I wanted. I wanted to come and really wow the world and it didn’t happen. I put pressure on myself. This year has been a lot better for me. The jitters and nerves aren’t there.”

Tonight’s round win on C5 Rodeo’s Black Hills moved Big Valley, AB’s Zeke Thurston from sixth to third in the world. At this point he’s third in the aggregate to boot.

“It’s awesome, there’s a lot of week left but I came off a horse and am behind in the average,” Thurston said. “But you’ve got to keep going at em and it will sort itself out. You have to hope for good draws and capitalize on your opportunities. Anything can happen but hopefully we can keep the ball rolling.” 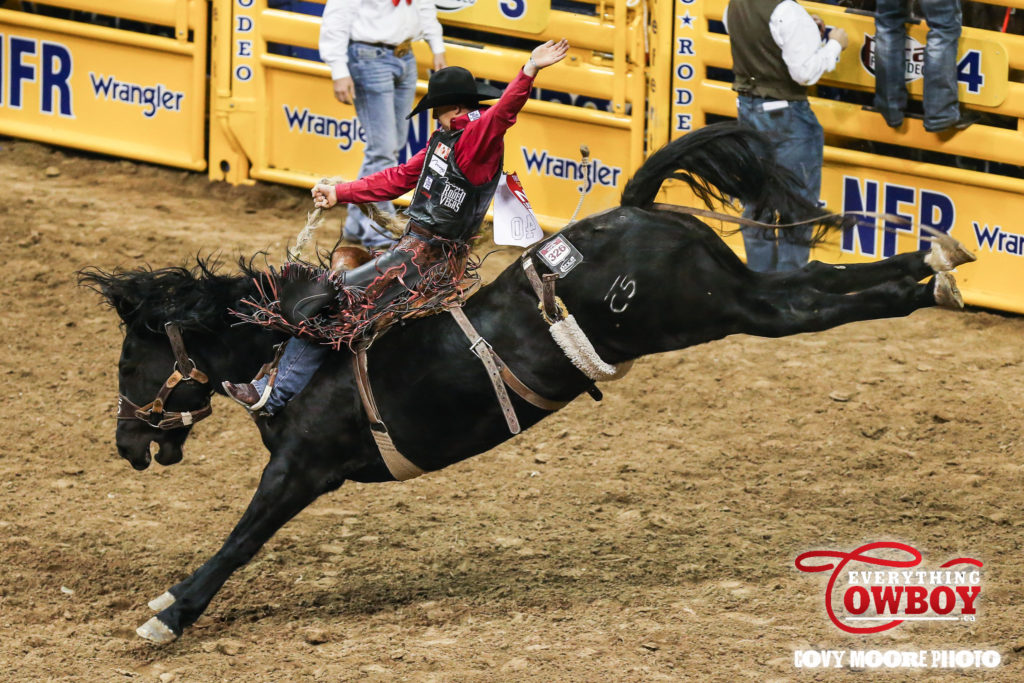 There have been a few streaks this week already with Ryder Wright’s four consecutive round wins in the bronc riding and the three in a row from JD Struxness in the bulldogging. For Canada, I still have to look up the stats but Jake Vold of Ponoka, AB might be one of the first from our country to win three consecutive rounds.

“I had that same horse at my first NFR two years ago,” Vold said. “I was about 81 on him and was fourth in the round. This time I was a lot more aggressive on him. I knew what to expect from him and how to help him to make the ride better.”

Vold did Jim Dandy one better this time around and he’s not Jim Dunn, currently fourth in the aggregate and fourth in the world. To this point he’s on a roll having already passed the $100,000 mark this week. With his confidence high, he’s still $90,000 back of the world number one.

Manitoba’s Orin Larsen put up a score of 85 points to earn his first check at his second Wrangler NFR. Larsen split third for $18,192. To this point he’s 13th in the aggregate and fifth in the world. Now, only one Canadian has yet to get a check this week, that’s Kolton Schmidt of Barrhead, AB. Unfortunately for Schmidt, his steer fell down tonight taking he and partner Shay Carroll down for a no-time.

Canada’s team ropers, Levi Simpson (Ponoka, AB) and Jeremy Buhler (Arrowwood, AB) stopped the clock in a time of 4.3 seconds but Buhler caught a leg to leave them with a time of 9.3. The 4.3 would have split them second but either way they haven’t moved in the world standings and are still ranked second in the aggregate.

Even though Zeke Thurston won the round, Jake Watson of Hudson’s Hope, BC has quietly earned nearly the same amount of money as Thurston this week. Watson picked up second tonight and even fanned his horse, Time’s Up from Frontier Rodeo for a score of 87 points and $20,731. The 2016 San Antonio Champion is leading the aggregate as one of two bronc riders six-for-six so far and now ranks eighth in the world standings. Clay Elliott of Nanton, AB ensured all three Canadians picked up a check in Round 6. Elliott scored 82.5 points to split sixth in round six for $2,115 to jump up one spot to 13th in the world and a couple spots to 12th in the aggregate.

Canadian bucking stock earnings through Round 5: $240,098