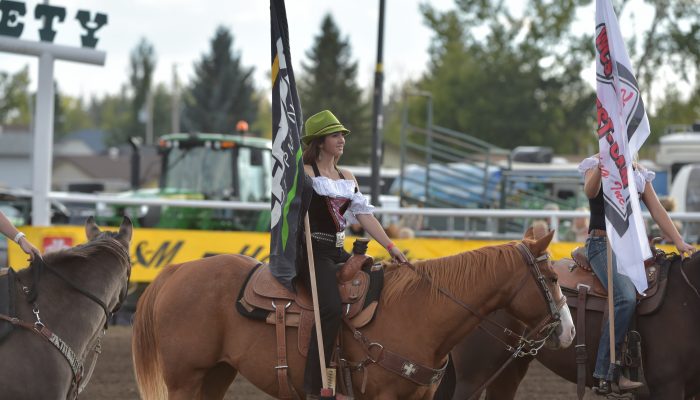 There’s only one pro rodeo where lederhosen, tubas and beer steins are all part of the fun. But that’s exactly what organizers of the Oldstoberfest want. Billed as the world’s first, and only, Bavarian rodeo, the organizing committee in Olds strives to blend the Bavarian culture with the western prairie heritage for a truly unique experience.

Pro cowboys got into the celebration spirit, savoring one of the last opportunities of the season to collect points for the Grass Roots Series and earn cash towards the Canadian Finals Rodeo in Edmonton next month. It certainly seemed the four-legged stars from C5 rodeo were in the mood to kick up their heels as well.

“It was great to see Colin Adams be 85 points on Virgil,” said Grant. “We’re really happy about that horse. He means a lot to us, and has done really well throughout the whole year.”

Another highlight, especially for local fans, was to see hometown cowboy Matt Richardson tie for first in the steer wrestling with Derek Frank, after both cowboys turned in snappy 3.8 second runs. Another cowboy from just down the road, up and comer Ben Robinson of Innisfail, scooped up the tie-down roping honors with an 8.1 second run. Meanwhile, another central Alberta talent, Shayna Weir of Ponoka, dashed away with the biggest cheque in barrel racing for her speedy time of 17.445 seconds around the pattern.

It was a big victory for Manitoba’s Tyrel Larsen, who took first in the saddle bronc riding to bring him closer to a CFR qualification. He was 83.5 points on a C5 horse called High Valley.

“That’s a horse of ours that’s really coming up the ranks, that was raised right there on the C5 ranch, so we were really excited Tyrel was able to win the rodeo on him.”

The packed grandstand Saturday night was treated to a first-class performance by World Champion Team Ropers Levi Simpson and Jeremy Buhler, who blazed through their run in a sizzling 3.9 seconds. The Oldstoberfest committee had ensured there was equal prize money for both the headers and the heelers, so the $1500 won by each partner for first will help them in their quest to win the season leader titles in Canada and secure a return trip to Las Vegas for the NFR.

You’d be hard pressed to find a happier cowboy, despite the chilly temperatures, than Lonnie West in the Friday evening performance. On his first bull back after an injury plagued season, the Cadogan cowboy was 87.5 points on the famed bull Gambler, to whoop his way around the arena on his victory lap. Moments later though, on a re-ride, Jared Parsonage was able to match that number on Calliope King.

“I dang sure got warmed up being on a bucker. It is cold though, really cold,” chuckled the Maple Creek rider. “It’s hard to keep warmed up, so you keep your coat on, and do some jumping jacks, and generally prepare yourself.”

“The bull kicked hard. He really went to kicking and spinning and fading out across the arena. I got in trouble at the end, for sure. But I kept going, trying as hard as I could and it worked out in the end. I dang sure never got off him. He bucked me off, fair and square. If it would’ve been nine seconds, I wouldn’t have rode him,” admitted Parsonage.

The win came just after Parsonage learned he was in the crying hole to get back to the Pendleton Rodeo short round, with his 79 score.

“Being 87.5 in Olds helps that out,” smiled Parsonage.

Throw in an 86 mark from Scott Schiffner and an 82 from Todd Chotowetz and it was an impressive night of bull riding at Olds.

“We’ve got a new pen of bulls out this year that we’ve been getting started,” noted Grant. “A lot came from down south, from Sammy Andrews and they’ve just been phenomenal.”

Each of the Oldstoberfest winners received a special treat to celebrate their victory – a toast to their success in the arena and a trophy stein.

“The Olds College provided us with the steins so we were happy to be able to present the champions with those, and Red Deer Ironworks supplied all the contestants with their own custom-made bottle of sugar beet rum.”

“There were a lot of really great rides this weekend, and we’re thankful for all the folks getting on, and all the timed event contestants too.

Returning after a one-year break, Grant was grateful to see the community embrace the whole Oldstoberfest event, and turn out in full force for the rodeo, the Tim Hicks concert and the beirgartens.

“We’re just super thrilled the event was a success, and it was really well attended. So we’re definitely up for next year!”

“This is an event that we’re looking to grow, not only rodeo-wise, but also concert-wise. We’re hoping to be able to give everybody some updates in a few months on the next Oldstoberfest.”