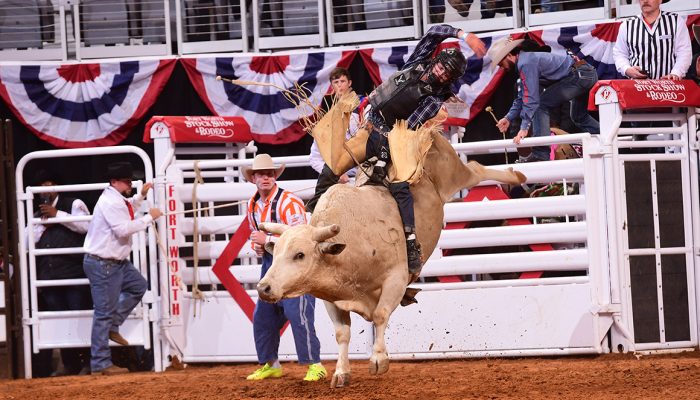 Maverick Potter of Waxahatchie, Texas, won the first two rounds at the FWSSR ProRodeo Tournament during the Fort Worth Stock Show & Rodeo January 24 and 25, earning nearly $5,000. He returns for a semifinal round February 6 and 7. FWSSR photo by James Phifer.

Potter was one of only two cowboys to stay on for the full eight seconds during Friday night’s opening round. He only scored 78 points on Rafter G Rodeo’s bull named Frosty, but that was the highest mark of the night and earned him $2,420.

Idaho’s Ruger Piva, who narrowly missed qualifying for his first National Finals Rodeo (NFR) last month, made the other qualified ride and earned $1,980.

The new tournament format debuted at Fort Worth this year when the rodeo moved from historic Will Rogers Coliseum to the new Dickies Arena. Fifty-six of the top rodeo athletes in North America compete in each of eight events for more than $1.2 million dollars prize money.

Seven groups of eight athletes will compete in consecutive rodeo performances in each event. The top two money winners from each group qualify for one of two semifinal rounds.

The winner of that second-chance round moves on to the semifinals as well. Then, the top four from each semifinal move on to the finals on Saturday, February 8 when the champions will be crowned.

After the first round, Potter knew he had a good chance to make the semifinals, but he didn’t take anything for granted.

“That just made me want to do better,” Potter said. “I’m always trying to get better.”

And he did just that. On Saturday afternoon Piva was the first cowboy out, scoring 82.5 points on Pickett Pro Rodeo’s bull Dark Thoughts. Potter was next and scored 87.5 points on another Pickett bull, Southern Style. Again they were the only two riders to make qualified rides.

“One of my traveling partners Parker McCown had drawn that bull at Waco,” Potter said, “so I knew a little bit about him.

The young bull rider left Fort Worth immediately following his winning ride to try to make the trip to West Monroe, Louisiana, for a rodeo performance Saturday night.

“That’s a blessing,” he said, upon learning he had earned $4,840 and was guaranteed a spot in the semifinals February 6 and 7.

Potter is just getting started in professional rodeo. His biggest win to date was first place at the PRCA Extreme Bulls event in Castle Rock, Wyoming, last summer. He also won the bull riding championship at the International Finals Youth Rodeo last July.

A pair of barrel racers earned semifinals berths by dominating first two rounds. Amanda Harris of Spearfish, S.D., won the first round and finished second in the second round. Not to be outdone, Cheyenne Allan of Mabton, Washington, who placed second in the first round, came back to win the Saturday afternoon round with the fastest time thus far – 16.55 seconds. Both women earned just under $3,100.

A new set of competitors compete Saturday night and Sunday afternoon at 2 p.m.

The following are unofficial results from the FWSSR ProRodeo Tournament at the Fort Worth Stock Show & Rodeo, Saturday, January 24, 2020. (Qualifiers are based on tie-breaker rules.)