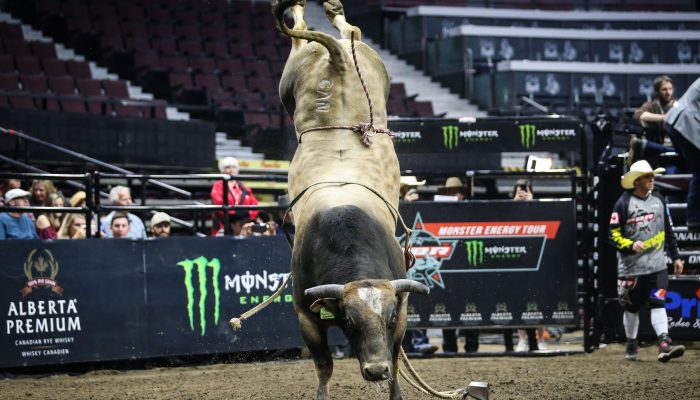 SASKATOON, Saskatchewan – With two weeks remaining prior to the 2019 PBR (Professional Bull Riders) World Finals, 10 Canadian bulls have been selected to buck at the sport’s most prestigious event, set to travel to Las Vegas and T-Mobile Arena for the five-day bull riding spectacle on Nov. 6-10.

The contingent is highlighted by reigning PBR Canada Bull of the Year and Bull of the Canadian Finals Happy Camper (Two Bit Bucking Bulls) who will be making his third consecutive appearance at the PBR World Finals.

After making his debut in 2017, when Dener Barbosa (Paulo de Faria) became the first rider to cover him for an 87-point score in Round 3, the bovine athlete returned to the World Finals in 2018, again ridden by Barbosa in the third round, scored 84.75 points. In the two outs, Happy Camper’s score improved: he was 42.5 points in 2017 and improved to 43 points in 2018.

Happy Camper made his regular-season Unleash The Beast debut in April, 2019 in Billings, Montana. Bucking twice, he was first ridden by Junio Quareisma (Meridiano, Brazil) for 86.75 points in Round 1, which he followed with a swift, 3.32-second buckoff of Rookie of the Year contenderCannon Cravens (Porum, Oklahoma) in Round 3.

On home soil, Happy Camper has twice been named the Bull of the Event on the Monster Energy Tour in 2019, earning the top marks in back-to-back events this March in Calgary and Lethbridge, Alberta.

Preparing to make his World Finals debut, Catch My Drift has been ridden nine times in 26 attempts across all levels of competition. He competed for the first time on the elite Unleash The Beast this April in Billings, bucking twice like his pen mate Happy Camper.

After besting Luciano De Castro (Guzolandia, Brazil) in Round 1 in 2.18 seconds to earn a 44-point bull score, Catch My Drift was taken to the 8-second whistle by current world No. 1 Jose Vitor Leme (Ribas do Rio Pardo, Brazil) for an 86.25-point score in Round 3.

From two-time PBR Canada Stock Contractor of the Year Wild Hoggs Bucking Bulls of Nanton, Alberta, the bovine athlete will be making his second consecutive appearance at the event. In Tykro Pound Sand’s 2018 World Finals debut, he was ridden in Round 3 by Joao Ricardo Vieira (Itatinga, Brazil) for 81.75 points.

Of the six stock contractors who had bulls selected, Lacombe, Alberta’s Outlaw Buckers Rodeo Corp. had the most bulls chosen with three. Their pen includes Fish Camp, Dilligaff and Wild Child, all of whom will be making their World Finals debut.

Among the trio, Fish Camp is unridden in seven outs across all levels of competition. This August the bovine athlete recorded his career-best out when he was marked 47 points at the PRCA (Professional Rodeo Cowboys Association) event in Ellensburg, Washington, dispatching Aaron Williams (Apple Valley, California) in a quick 2.09 seconds.

Five-time, and reigning, PBR Canada Stock Contractor of the Year Nansen Vold and Vold Rodeo will haul two bulls to the Vegas event from Ponoka, Alberta.

Come On Over (Vold Rodeo/Prescott) and Big City Nights (Vold Rodeo), will both be making their World Finals debut inside T-Mobile Arena.

While Come On Over has been ridden once in nine outs on record, Big City Nights has yet to be covered in seven outs.

Big City Nights is also no stranger to the sport’s top tour, bucking on the Unleash The Beast this April in Billings, Montana. At the event, the bovine athlete was marked 42 points for his 4.86-second buckoff of Taylor Toves (Stephenville, Texas).

Of Cochrane, Alberta, Homegrown, competing for the first time at the PBR World Finals, has been ridden five times in 27 attempts across all levels competition. In an all-Canuck match-up, current Canadian No. 1 Dakota Buttar (Kindersley, Saskatchewan) was the last rider to cover the bull, scored 87.5 points this August in Coronation, Alberta on the Touring Pro Division en route to a runner-up finish.

Homegrown made his Unleash The Beast debut in October 2018 at the Nampa, Idaho, event and has since appeared on bull riding’s premier series in three additional cities. He most recently bucked in Minneapolis, Minnesota, dispatching Kurt Shephard (Mareeba, Queensland, Australia) in 4.81 seconds to earn a 43.75-point bull score.

Hailing from Prince Albert, Saskatchewan, Finning Lil Shorty, also set to buck at the PBR World Finals for the first time, has had a career-best season in 2019.

After the bull teamed with 2017 PBR World Champion Jess Lockwood (Volborg, Montana) for a massive 91.5-point score at the 2019 Calgary Stampede, he had his career-best out late in July while competing on the Touring Pro Division in Manor, Saskatchewan. Dispatching Roy in a close 7.26 seconds, Finning Lil Shorty was marked a career-high 46.5 points.

The PBR World Finals get underway with Round 1 on Wednesday, November 6 at 6:40 p.m. PST.

Fans can watch all the action on CBS Sports Network, check your local listings, or tune into the listen LIVE stream of the event on RidePass.com or via the RidePass mobile app.