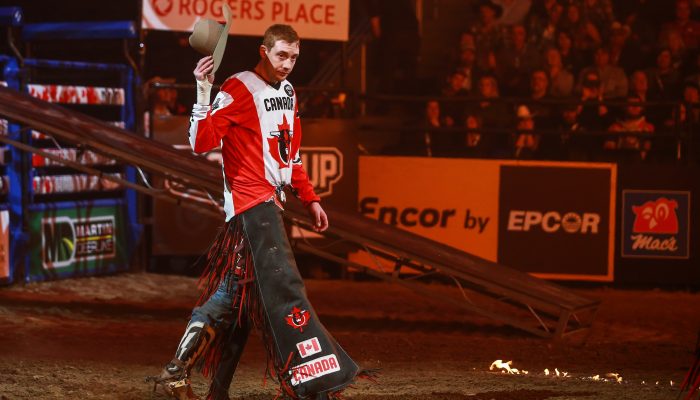 NEW YORK CITY – Four-time PBR (Professional Bull Riders) World Finals qualifier and three-time Glen Keeley Award winner Tanner Byrne (Prince Albert, Saskatchewan) has announced that at the conclusion of the 2019 season he will retire from professional bull riding in pursuit of a career as a professional cowboy protection bullfighter.

While Byrne plans to ride until the conclusion of the current season, capped by the 2019 PBR World Finals (Nov. 6-10) and PBR Canada Finals (Nov. 22-23), he will also begin to concurrently work events as a bullfighter.

“I just want to follow my dream,” Byrne stated. “Life is too short not to go out after something full-heartedly. It is time for me to do what it takes, enjoy what I am doing and go after it. It was a lifelong goal and dream of mine that I am going to go at now and start this new chapter and see how we can get it done.

“It is kind of fun now to be an 18-year-old-kid again, just buying his PBR card, hitting the trail, trying to make it to the top. That is what I am doing as a bullfighter. It is fun to start over and see how far I can get on this side of it.”

Throughout his professional riding career that has spanned the last decade, Byrne has firmly etched his name in the record books as one of the sport’s most accomplished Canadians. Having gone 107-for-285 to date on the premier Unleash The Beast, Byrne has also earned three premier series event wins, tied with Reuben Geleynse(Winchester, Ontario) for the most in PBR history by a Canadian-born rider.

In 2015 Byrne put together the greatest season ever by a Canadian by going a career-best 35-for-78 (44.87%) to finish No. 8 in the world standings, capped by a career-best third-place finish at the PBR World Finals. He was also crowned the PBR Canada Champion that season.

Byrne is also known for his work as President of the Ty Pozzobon Foundation. Formed in memory of his late friend and fellow professional bull riderTy Pozzobon, the organization’s mission is to protect and support the health and well-being of rodeo competitors inside and outside the arena.

“This fits into everything I want to do along with the Ty Pozzobon Foundation of protecting and supporting the health and well-being of Western Sports athletes in and out of the arena,” Byrne said. “I have done that through the foundation and communication pieces and what we have done outside of the arena for everybody. Now it is kind of cool for me to do it inside of the arena.”

For Byrne the transition from rider to cowboy protector has always been part of his career trajectory he set out with as a kid. He will now begin to establish himself in the field where his family is regarded as legends as he looks to become the first individual to ride and bullfight at the sport’s most prestigious event – the PBR World Finals.

Tanner is the son of Ryan Byrne who qualified for 14 consecutive Canadian Finals Rodeos and in 1987 became the first Canadian to ever cowboy protect at the National Finals Rodeo.

One of three sons, both of Tanner’s older brothers, Bo and Jesse, along with cousin Scott, are also prominent and well-respected within the industry. Among the trio’s accomplishments, Scott made 14 appearances at the CFR, while Jesse, who is seen weekly on the premier Unleash The Beast, became the first Canadian to work the PBR World Finals in 2008.

While Byrne has already stepped into the arena as a bullfighter at the Canadian Touring Pro Division event in Falher, Alberta on June 15, he will next lace up his cleats on July 2-4 for the three days of action at Ranchman’s in Calgary.

Courtesy of the PBR