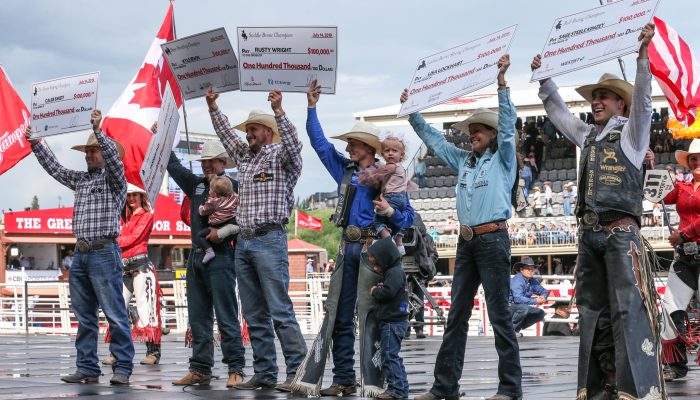 CALGARY, Alberta – A new set of competitors rode, roped, wrestled and ran their way into the history books of the Calgary Stampede as they emerged victors on an always exciting Championship Sunday.

While the majority of this year’s Champions were first-timers, one cowboy who often rises to the top in this town is Sage Kimzey.

The Oklahoma bull riding sensation and five-time World Champion collected his third treasured bronze in Calgary, just as he did in both 2015, and in 2017.

Kimzey plucked an old friend out of the Showdown draw, a Calgary bull called Night Moves. It was the fourth time the two had met, and Kimzey figures this trip was the best.

“He’s getting older — a lot stronger than what he used to be. He bucked really hard right out of there, kind of hopped and skipped. I could just tell he was really bucking under me. So I gritted my teeth and got through it.”

“Feels good to be 92.5, for sure, not to mention the hundred thousand dollars that goes with it,” grinned the cowboy.

The other repeat winner came in the barrel racing, when Lisa Lockhart managed to steer her horse around the barrel pattern in 17.116 seconds, a mere three one-thousandths of a second faster than Hailey Kinsel, who was 17.119.

Lockhart, who won her first Calgary Stampede in 2015, is as even-keeled as they come when she’s on board her horses, but the combination of adrenaline and emotions bubbled over when she found out she’d won the bronze and the $100,000 cheque.

“I’ve been crying! My tears have finally stopped running. I think, more than anything, it’s the elation because it means so much. I think the older you get, the more it means. It’s not just about the money; it’s just about what transpired. I didn’t expect this to happen. It’s been a field of amazing competition this week.”

There was a mighty good chance the saddle bronc honors at Calgary was going to go the Wright way, when three of the four Showdown contenders were from the famous Utah bronc riding family. When Rusty Wright climbed aboard the Northcott-Macza legend Get Smart, they matched moves and the 23-year-old was up to the challenge, notching 92 points and earning his first Stampede title.

“It’s awesome. It’s always nice to have family win it back-to-back. I’ve been coming to this rodeo since I was little. I rode in the novice and I’ve been coming here since then, so it’s really awesome to be able to hold the $100,000 cheque over my head.”

The rodeo announcers claimed his nickname was the Alabama Slammer, but the good-natured southern bulldogger didn’t mind. Kyle Irwin lived up to his reputation when he stuck to his game plan and came out of the Showdown with his first oversized cheque for $100,000, after wrestling his steer in 3.8 seconds.

“This crowd, there’s so much energy here. I promise you the animals can feel it, we can feel it, or I sure can anyways. To get here and compete at Calgary for this kind of money, it’s an amazing opportunity.”

“I knew I drew two good horses today,” Aus said. “My ride felt great, and when I heard the score, I was excited. But I didn’t want to get too excited, because I’ve seen some monster rides here and some monster scores. Everybody rode great today and to come out on top means the world to me. It’s life-changing.”

In the field of the four tie-down ropers to advance, Caleb Smidt was the only one who hadn’t had a chance to hoist the big cheque but it proved to be his turn in 2019. Smidt shaved off a critical few tenths come his turn, and the 7.3 gave the Texas cowboy his first Calgary win.

“Just to be here on Sunday to rope for a hundred thousand, there’s no better feeling,” said Smidt, who was runner-up last year. “I got to go last, and I knew what I had to be and it all worked out.”

The Guy Weadick award was presented to Dustin Flundra, a saddle bronc riding veteran who’s competed at Calgary every year but two since his debut in 1999.

“It’s pretty special. This is one of the awards that when you’re rodeoing, you never really think of anything like this,” said the Pincher Creek cowboy, with emotion in his voice. “But these are the awards that are special because somebody else has selected you on your merits. You never expect things like this but to get it, and I’m still surprised. I’m definitely appreciative of this moment. It’s pretty awesome.”