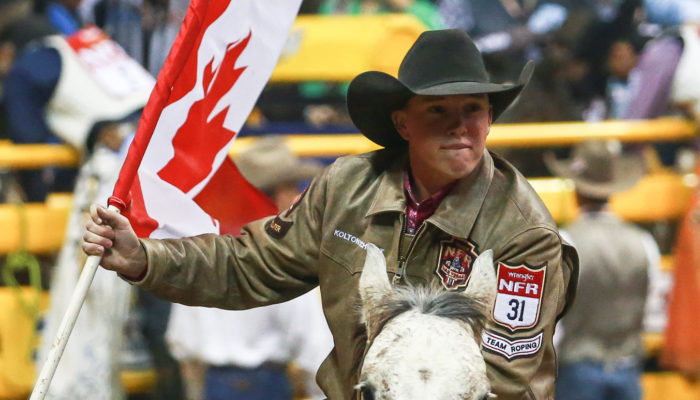 Schmidt looking to bounce back from slow start to WNFR

Nothing’s been going right in the arena this week for Canadian team roper Kolton Schmidt.

The 22-year-old header has had no luck at all in his debut at the Wrangler National Finals Rodeo in Las Vegas this week. Through the first seven rounds of the world’s most prestigious rodeo, Schmidt and his roping partner Shay Carroll have posted just one qualified time – a 10.90 in round two.

The other six runs have ended up in no times, leaving Schmidt as the lone Canadian without a check so far.

Despite the less-than-ideal start to the week, though, the Barrhead, Alta. cowboy said he’s hopeful that the worst is behind him.

“I think we’ll finish strong. I didn’t do very good at the beginning of the week and I had some bad luck the last couple of nights. I think if I just keep sticking to it it’s going to turn around,” Schmidt said.

Although it would be easy to blame the misfires on bad draws or equipment malfunctions, the young gun said he’s not about to pass the buck on to bad luck.

“It’s just been me the whole time. I just haven’t done my job good enough yet,” he said, adding that it’s going to be important for him not to dwell on the last seven nights heading into the final three rounds.

This is the first time the former College National Finals Rodeo champion has made an appearance at the Super Bowl of rodeo and he said he couldn’t be happier to be there.

“It’s a dream come true. I’d feel a lot better, of course, if I was doing better. But it’s been everything I wanted. It’s been good,” said Schmidt, who is one of the few Canadian team ropers ever to qualify for the big show.

“It’s pretty special, you know. I’m happy to be here with Levi (Simpson) and Jeremy (Buhler) and I’m sure happy that them guys are doing good. They’ve got themselves a chance at the gold buckle and it would be pretty crazy to bring it back to Canada,” he said, adding that the buckle isn’t something that really weighs on his mind all that much.

“It was never weighing on your mind. It’s a goal and a dream. It’s a good thing. The only thing that weighs on your mind is not being a part of that race, which is disappointing, if anything.”

From here on in it’s all about going out with a clear mind and putting up some fast times.

“I give myself a good chance every night and I have a good attitude every time I back in the box. I’ll keep trying my luck out here a few more times. Hopefully we can get us some money put together and go home and get rebooted and hopefully get back here next year so I can do better,” Schmidt said.

“You’re back in the box and you’ve got to think fast. There’s nothing else to worry about.”