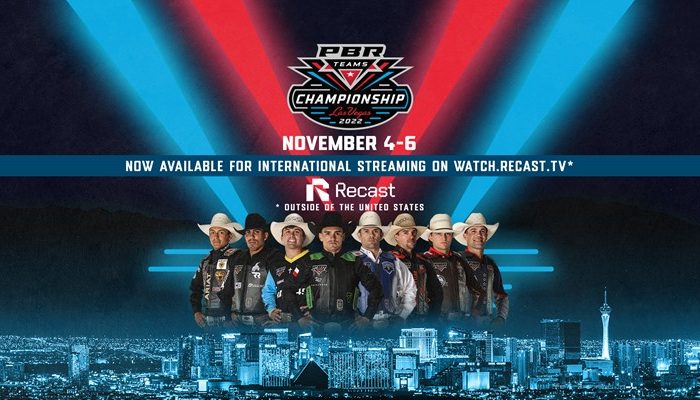 More than 160 bull riding events to be streamed annually to fans who lacked viewing access.

PUEBLO, Colo.– As the sports world turns its eyes toward the inaugural PBR (Professional Bull Riders) Team Series Championship this weekend in Las Vegas, Nevada, (Nov. 4-6), PBR has announced a new way for fans outside the U.S. to catch the bull riding action through Recast, a non-subscription, live and on-demand sports and entertainment platform.

Live PBR events currently not available to fans outside the U.S. will now be carried on Recast, a growing streaming platform with more than 150 channels, ranging from Manchester City and FC Internazionale Milano to British Fencing and World Curling.

Recast is free for fans to join, easy to use, accessible from any device, and affordable. Fans can watch PBR Live by redeeming “Cast Credits” which can either be purchased or earned in-platform by watching ads, sharing videos or data, or by inviting friends to join. Fans who join Recast automatically receive 100 free Cast Credits.

“As a growing, global sport, PBR is thrilled to join Recast to significantly increase our reach with an easy and affordable solution for fans to watch our live events,” said Lawrence Randall, Senior Vice President, Head of Content for PBR. “While nothing changes for those in the United States, our fans abroad will now have live access to the marquee PBR events they’ve been asking for.”

To follow PBR’s Recast Channel and watch all the action from the Team Series Championship, join Recast for free by visitinghttps://watch.recast.tv

Recast is a platform that resets what it means to stream. Making access fairer, rewarding creators better, and connecting through content. Where Fans pay creators per view, rather than the platform a subscription. And where up to 85% of the income goes directly to the Publishers. A fairer split for creators and a fairer choice for Fans. Headquartered in Edinburgh with a staff of over 50, the company has raised £15m investment to date. Currently available in over 90 countries, it has over 150 channels ranging from British Fencing to Manchester City and World Curling, with a steady stream of new Channels coming onboard.

PBR is the world’s premier bull riding organization. More than 500 bull riders compete in more than 200 events annually across the televised PBR Unleash The Beast tour (UTB), which features the top bull riders in the world; the PBR Pendleton Whisky Velocity Tour (PWVT); the PBR Touring Pro Division (TPD); and the PBR’s international circuits in Australia, Brazil, Canada and Mexico. In 2022, PBR launched the PBR Team Series—eight teams of the world’s best bull riders competing for a new championship—as well as the PBR Challenger Series with more than 60 annual events nationwide. The organization’s digital assets include PBR RidePass on Pluto TV, which is home to Western sports. PBR is a subsidiary of Endeavor, a global sports and entertainment company. For more information, visit PBR.com, or follow on Facebook at Facebook.com/PBR, Twitter at Twitter.com/PBR, and YouTube at YouTube.com/PBR.