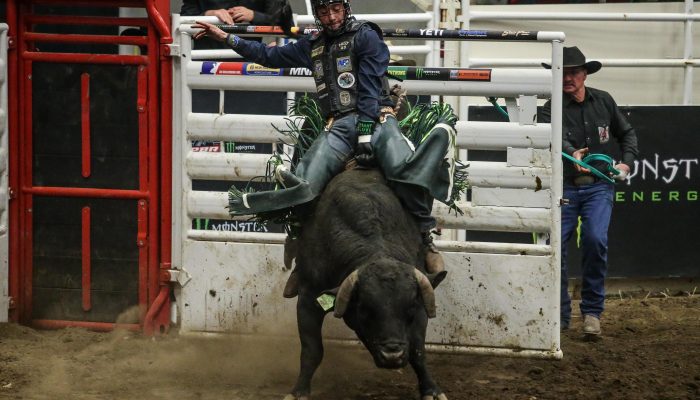 Tickets for the Calgary Classic on sale Friday, August 16 at 10 a.m. MT

After making history in 2018 as the first ticketed event in venue history to sell out, the Monster Energy Tour expanded its now annual stop in Calgary to a two-day affair in 2019, welcoming a sold-out crowd Saturday March 23 for the stop’s final rounds.

In 2019, Jordan Hansen (De Winton, Alberta) went a perfect 3-for-3 to win for the first time on the nation’s premier tour. As the lone rider to deliver a flawless performance at the Stampede Park venue, Hansen sealed the victory when he made the 8 on Twist of Barbwire for 87 points and surged from No. 5 to No. 1 in the nation.

The event also featured a breakout performance from Innisfail’s Riley Gagnon who joined an elite contingent of riders when he covered reigning PBR Canada Bull of the Year Happy Camper for 89 points in the championship round to finish second.

The bull riding action begins at 7:30 p.m. MT on both Friday, January 24 and Saturday, January 25 at the Nutrien Western Event Centre. All riders will attempt one bull each in Round 1 on Friday, and Round 2 on Saturday. The Top 10 will then advance to the championship round on Saturday for one more out and a chance at the event title. In addition to competing for points towards the Canadian national standings, riders will also have the opportunity to earn world points in an effort to earn a berth onto the elite PBR Unleash The Beast. As part of the Monster Energy Tour, riders have the opportunity to earn increased world points, with the event winner netting 170 world points.

Tickets for the two-day Calgary Classic go on sale Friday, August 16 at 10 a.m. MT. They range in price from $25 to $100, standard fees apply, and can be purchased at the Scotiabank Saddledome Box Office, or online at www.ticketmaster.ca.