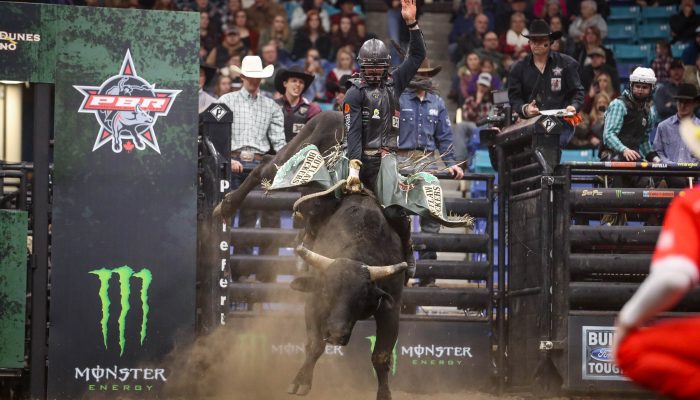 Tickets for the Regina Classic on sale Thursday, December 19 at 10 a.m. CST

REGINA, Saskatchewan – For the first time in league history, PBR (Professional Bull Riders) Canada’s elite Monster Energy Tour will stop in Regina, Saskatchewan, with the “toughest sport on dirt” set to buck into the Brandt Centre on March 14, 2020 with the Regina Classic.

While the event will mark the first-ever Monster Energy Tour stop in Regina, the Queen City is no stranger to the edge-of-the seat adrenaline experienced at a professional bull riding event, welcoming the Touring Pro Division for two events in June 2011.

After Ty Patten (Strathmore, Alberta) went a flawless 2-for-2 to win the first-ever PBR event in Regina, three-time PBR Canada Champion, and Saskatchewan’s own, Aaron Roy (Yellow Grass) delivered a matching perfect performance to win the most recent stop.

The Monster Energy Tour’s debut in Regina will come on the heels of one of the most intense national title races in league history as the world’s best battled it out to be crowned the 2019 PBR Canada Champion.

While home province favorites Jared Parsonage (Maple Creek, Saskatchewan) and Dakota Buttar (Kindersley, Saskatchewan) entered the season-culminating PBR Canada Finals ranked No. 1 and No. 2 in the nation, within a slim 32.49 points of one another, a dominant performance by young gun Daylon Swearingen (Piffard, New York) allowed him to complete one of the most riveting come-from-behind surges in history.

In the bull pen, the sport’s bovine athletes were also embattled in a feverish race to be crowned the 2019 PBR Canada Bull of the Year.

Entering the event No. 1 in the nation with a 0.4-point lead, Homegrown from Coronation, Alberta’s Eno Bucking Bulls, was able to hold off a hard-bucking Happy Camper from Magrath, Alberta’s Two Bit Bucking Bulls to capture the season’s end honor by a slim 0.083 points.

The bull riding action begins at 7:00 p.m. CST on Saturday, March 14 at the Brandt Centre. All riders will attempt one bull each in Round 1 on Saturday. The Top 10 will then advance to the championship round later that evening for one more out and a chance at the event title. In addition to competing for points towards the Canadian national standings, riders will also vie for crucial points towards the World Finals.

Tickets for the Regina Classic go on sale Thursday, December 19 at 10 a.m. CST. They range in price from $25 to $100, and can be purchased online atTicketmaster.ca or at the Brandt Centre box office.